The role of Christian doctors - Elijah or Obadiah? 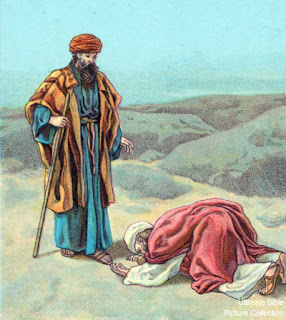 The Old Testament prophet Elijah's confrontation with the prophets of Baal in 1 Kings 18 is one of the best-known stories of the Old Testament. One man has the courage to stand up to Israel's apostate king Ahab and his evil wife Jezebel and wins a great victory on Mt Carmel. God himself intervenes in the contest both to vindicate Elijah and to demonstrate his own majesty and power. It is a reminder that even during the darkest times of human history God remains in control.

The story of Elijah's withdrawal into the desert when later overcome by fear and exhaustion is one beloved by all who have ever found themselves 'honourably wounded' in the Lord's service. God's provision of food, drink, rest and a fresh refilling with his Spirit is a prescription we all need to draw on frequently if we are to retain our sanity and spiritual health in a world increasingly hostile to Christian living and Christian values.

But the story that I would like to draw your attention to is that which immediately precedes the battle on Mt Carmel – the meeting that takes place between Elijah and Obadiah. Obadiah is a lesser known Bible character – but he was in charge of King Ahab's palace and clearly, like Joseph, Daniel, Nehemiah and Mordecai in other Bible stories, had risen to a position of great influence and responsibility in government. We are also told that he was a 'devout believer in the Lord' and that while Jezebel was killing off the Lord's prophets, Obadiah had 'taken a hundred of the Lord's prophets and hidden them in two caves… and supplied them with food and water'. Like a former day Schindler, he was prepared to take risks to do the right thing.

Ahab, egged on by his wife, intended to kill Elijah, who had three years earlier prophesied to him that God was sending a drought as judgement on Israel's idolatry and apostasy. The meeting between Elijah and Obadiah took place as the latter was combing the land at Ahab's command to find grass to feed Ahab's starving animals.

Elijah tells Obadiah to go to Ahab and announce his arrival but Obadiah is reticent to do so afraid that if Ahab cannot then find Elijah, his own life will be in danger. He is reassured when Elijah agrees to meet Ahab himself later that day. As they say the rest is history.

It can be uncomfortable to be an Elijah in today's world. But some of us are called to do just that – to stand up for justice and truth publicly in a hostile environment, delivering messages that the powers that be might not want to hear, being prepared to confront injustice and corruption, speaking out in order to be a 'voice for the voiceless' through letters, articles, submissions, personal visits and on the media.

The responsibility of Elijahs is to speak the truth without compromise; but the danger of playing such a prophetic role is that one can come across as bigoted, simplistic and strident - throwing judgements like grenades from a distance whilst shrinking from the face-to-face encounters with those in authority that really bring results. Elijah did not shrink from seeing the job through and risking all to do it – and he was also prepared to face the risk of meeting Ahab and not leave Obadiah to face him alone.

It can be equally unsettling to be an Obadiah – occupying a position of responsibility in our society's corridors of power. Obadiahs have responsibilities too – to use the position of power and influence God has given them to protect the vulnerable and innocent and to be willing to face up to unjust authority when it is called for. The danger of playing this 'incarnational' servant role is that one can be tempted to become compromised, timid and anxious about one's reputation. Obadiah was afraid about what Ahab might do – but despite his fear he was willing to pass on Elijah's message to the king, even though it put his own life at risk.

God needs Christian doctors in these days who are willing to be prophets like Elijah, people who are prepared to speak unpalatable truth, who are willing to put their heads above the parapet to expose corruption and injustice, and challenge flawed policy, regardless of the personal cost. And God also needs Obadiahs who will accept responsibility within our society's flawed institutions – in NHS Trusts, Royal Colleges, Hospitals, BMA, GMC and government – in order to be salt and light; to safeguard the services for the most vulnerable and to care with compassion for the most needy. And most importantly God needs the Elijahs and Obadiahs to work together, respecting, enabling and encouraging one another, for the extension of his kingdom and for his glory.

Whether you see yourself as an Obadiah or Elijah, or someone called to play another role entirely, God will equip, inform and inspire you on that journey.
Posted by Peter Saunders at 13:52