Oregon Governor orders that some state-sanctioned killing must stop 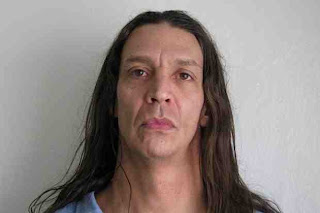 Earlier this week, in an emotional declaration (£), the Governor of the US state of Oregon, John Kitzhaber, said he would refuse to sanction any further executions.

Today he was strongly criticised (£) by a condemned man who called him a ‘coward’.

Gary Haugen (pictured), a double murderer, wants to be executed to protest at weaknesses in the justice system. He told The Statesman Journal that Kitzhaber had acted on his personal beliefs instead of carrying out the will of Oregon voters who reinstated the death penalty in 1984.

‘I feel he’s a paper cowboy,’ Haugen said. ‘He couldn’t pull the trigger.’

Haugen, 49, was sentenced to death for stabbing a fellow prisoner in 2007 while serving a life sentence for killing a former girlfriend’s mother 30 years ago. He was to have been executed on 6 December until Mr Kitzhaber intervened.

Haugen says he is considering legal action to fight the reprieve which lasts until the governor leaves office.

Interestingly, Oregon is one of only two states in the US which have legalised assisted suicide, also in response to a referendum.

But the Governor isn’t showing any signs of repealing that law.

In brief, Dr Bentz’s patient, being treated for cancer, became depressed. Dr Bentz’s letter concludes: ‘In most jurisdictions, suicidal ideation is interpreted as a cry for help. In Oregon, the only help my patient got was a lethal prescription intended to kill him. Don't make Oregon’s mistake.’

So Oregon is left in the curious position of endorsing ‘state-sanctioned killing on request’ in some circumstances (ie. for vulnerable sick people) but opposing it for others (ie. for those guilty of murder)

Wouldn’t it be better just to stop all state-sanctioned killing?
Posted by Peter Saunders at 14:27