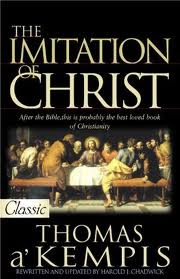 ‘Jesus has always many who love His heavenly kingdom, but few who bear His cross; many who desire consolation, but few who care for trial; many to share His table, but few to take part in His fasting. All desire to be happy with Him; few wish to suffer anything for Him. Many follow Him to the breaking of bread, but few to the drinking of the chalice of His passion. Many revere His miracles; few approach the shame of the Cross. Many love Him as long as they encounter no hardship; many praise and bless Him as long as they receive some comfort from Him. But if Jesus hides Himself and leaves them for a while, they fall either into complaints or into deep dejection…

If a man gives all his wealth, it is nothing; if he does great penance, it is little; if he gains all knowledge, he is still far afield; if he has great virtue and much ardent devotion, he still lacks a great deal, and especially, the one thing that is most necessary. What is this one thing? That leaving all, he forsake himself, completely renounce himself, and give up all private affections. Then, when he has done all that he knows ought to be done, let him consider it as nothing, let him make little of what may be considered great; let him in all honesty call himself an unprofitable servant…

No one, however, is more wealthy than such a man; no one is more powerful, no one freer than he who knows how to leave all things and think of himself as the least of all.'

I first read this passage titled ‘Of the fewness of those who love the cross of Christ’ when I was a fourth year medical student. It comes from Thomas à Kempis’ Imitation of Christ, and was written in 1427 in the late middle ages, a time characterised by general moral and ethical decline and of widespread secularisation. The book survives in 700 manuscripts and 2,000 printings and has been translated into 90 languages, and is the most popular book in history outside the Bible.

I was deeply moved by it because I recognised that the person being described – the mercenary, the fair weather Christian, the one who loved miracles and God’s heavenly Kingdom but actually wasn’t willing to carry Jesus’ cross… was me.

The term ‘radical discipleship’ is a tautology, because Christian discipleship is radical by its very nature. Jesus is a radical King who calls us to follow him in his radical footsteps. ‘Christian disciple’ actually means ‘follower of Jesus’. Acts 11:28 tells us that the disciples were first called Christians in Antioch – many years after Pentecost. Before that they were called disciples. Christian and disciple are one and the same.

The Gospel is not some kind of therapy to make our lives easier. Discipleship is costly. It involves suffering, persecution and hardship because it involves following in the footsteps of Jesus. Becoming a Christian does not insulate us from suffering. If anything it makes us targets.

Jesus pulled no punches with his disciples:

John understood what it meant to follow Jesus: ‘This is how we know we are in him: Whoever claims to live in him must walk as Jesus did.

We can be greatly blessed by God and not be his disciples; countless people were healed by Jesus who never became his disciples because they never repented and became his followers. We can be greatly used by God and not be his disciples – Judas was. The parable of the houses on rock and sand make it clear that those who build their houses on the rock are those who both hear God’s word and obey it. Scripture teaches us that there were many who thought they were out who were actually in, and many who thought they were in who were actually out. We cannot have Jesus as Saviour without also having him as Lord – being a disciple means following in his footsteps.

Are we serious about following Jesus in this day and age knowing that it will cost us, that there is suffering and hardship, that there is a price to pay? Do we think Jesus is worth it? That depends on whether we really understand who he is and what he has done for us.

Jesus is God himself who came to this earth to be rejected, humiliated, abused, murdered and nailed to a cross in order to rescue us from the hell and judgement we rightly deserve; in order to call us to be partners with him in his work of redemption and then to spend all eternity with him.

If we really understand what we have been saved from and what we have been saved to then we will also recognise that we don’t have any choice but to respond to his call to follow and say like Peter did in John 6:68-9: ‘Lord, to whom shall we go? You have the words of eternal life. We believe and know that you are the Holy One of God.’
Posted by Peter Saunders at 09:21