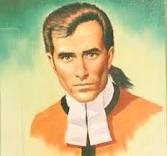 On a run this morning I listened again to John Piper’s excellent biography on the life of David Brainerd, widely known as the missionary to the American Indians.

I love Piper’s missionary biographies and listen to them again and again always picking up something new.

In this one Piper particularly recommends Jonathan Edward’s ‘Life of Dave Brainerd’ which he says has never been out of print, but the only copies I could find on the web were several hundred dollars each so I will have to give that a miss. The biography though is an inspiration in itself and well worth the listen (or read).

‘David Brainerd was born on April 20, 1718 in Haddam, Connecticut. That year John Wesley and Jonathan Edwards turned 14. Benjamin Franklin turned 12 and George Whitefield 3. The Great Awakening was just over the horizon and Brainerd would live through both waves of it in the mid thirties and early forties, then die of tuberculosis in Jonathan Edwards' house at the age of 29 on October 9, 1747.’

He then outlines how he was present at Yale University at the beginning of the Great Awakening when Whitefield visited. Later he was thrown out of the university for his part in it, but God turned this disappointment into 'His appointment'.

‘Brainerd preached to the Indians at the Forks of the Delaware for one year. But on June 19, 1745 he made his first preaching tour to the Indians at Crossweeksung, New Jersey. This was the place where God moved in amazing power and brought awakening and blessing to the Indians. Within a year there were 130 persons in his growing assembly of believers.’

He then sums up the impact he has had upon other great missionaries who followed:

‘It was a short life: twenty-nine years, five months and nineteen days. Only eight of those years as a believer, and only four of those as a missionary. Why has Brainerd's life made the impact that it has? One obvious reason is that Jonathan Edwards took the Diaries and published them as a Life of Brainerd in 1749. But why has this book never been out of print?

Why did John Wesley say, "Let every preacher read carefully over the 'Life of Brainerd'"? Why was it written of Henry Martyn that "perusing the life of David Brainerd, his soul was filled with a holy emulation of that extraordinary man; and after deep consideration and fervent prayer, he was at length fixed in a resolution to imitate his example"? Why did William Carey regard Edwards' Life of Brainerd as a sacred text? Why did Robert Morrison and Robert McCheyne of Scotland and John Mills of America and Frederick Schwartz of Germany and David Livingston of England and Andrew Murray of South Africa and Jim Elliot of modern America look upon Brainerd with a kind of awe and draw power from him the way they and countless others did?

Gideon Hawley, another missionary protégé of Jonathan Edwards spoke for hundreds when he wrote about his struggles as a missionary in 1753, “I need, greatly need something more than human to support me. I read my Bible and Mr. Brainerd’s Life, the only books I brought with me, and from them have a little support.”’

Piper speculates as to why Brainerd’s life had such an impact and asks specifically why reading about Brainerd has encouraged him to press on in the ministry and to strive for holiness and divine power and fruitfulness in his life.

He concludes that Brainerd’s life ‘is a vivid, powerful testimony to the truth that God can and does use weak, sick, discouraged, beat-down, lonely, struggling saints, who cry to him day and night, to accomplish amazing things for his glory’.

He then outlines the struggles Brainerd faced as follows, expanding on each in turn:

‘I think the reason Brainerd's life has such powerful effects on people is that in spite of all his struggles he never gave up his faith or his ministry. He was consumed with a passion to finish his race and honor his Master and spread the kingdom and advance in personal holiness. It was this unswerving allegiance to the cause of Christ that makes the bleakness of his life glow with glory so that we can understand Henry Martyn when he wrote, as a student in Cambridge in 1802, “I long to be like him!”

Brainerd called his passion for more holiness and more usefulness a kind of “pleasing pain.” “When I really enjoy God, I feel my desires of him the more insatiable, and my thirstings after holiness the more unquenchable; ... Oh, for holiness! Oh, for more of God in my soul! Oh, this pleasing pain! It makes my soul press after God ... Oh, that I might not loiter on my heavenly journey!”’
Posted by Peter Saunders at 07:03