Christchurch earthquake one year on: Lest we forget 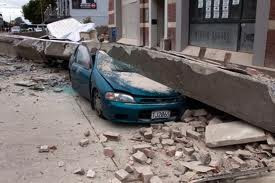 Today, 22 February, people across New Zealand have been holding memorial services to remember the 185 people who died in the powerful earthquake in Christchurch a year ago. Two minutes' silence were observed at 12:51 local time - the exact moment the 6.3-magnitude quake struck.

Prime Minister John Key said the tremor had ‘changed everything’, but had not broken the city's spirit.

The quake wrecked central Christchurch, and is considered the country's worst natural disaster in 80 years.

At a ceremony at North Hagley Park in Christchurch, tens of thousands gathered for a solemn and tearful memorial. Family members of the victims were seen joining arms and bowing their heads during the ceremony that included songs and speeches.

Governor General Jerry Mateparae read a message of condolence from Prince Charles, while a video from US Secretary of State Hillary Clinton was played. Earlier, a memorial was held in Christchurch's Latimer Square for families of the victims. Children released 185 monarch butterflies at the park in memory of those who died.

Speaking in the city, the prime minister said it had been one of New Zealand's darkest days.

Today, like many other New Zealanders, and especially those of us with a connection to Christchurch, I am reflecting and remembering.

I didn’t lose any friends or relatives in the quake. One by one they were all found to be alive and well, although all with their own stories of ‘that day’ to tell. I’m not aware even of any that were injured, although there were some very near misses and some, especially Christian medical colleagues, were involved in treating victims, in the rebuilding and in planning the longer term public health strategy.

I guess we all feel it more acutely when it involves the personal and familiar. But amidst the feelings of loss and grief, I have felt proud to be a New Zealander, and proud at the way my nation has responded.

To stand last year with 5,000 Kiwis at the Westminster Cathedral remembrance service in London, was quite special. To be at Twickenham shortly afterwards with my family to see my home team the Canterbury Crusaders, playing here because their home stadium had been destroyed, was a profoundly moving experience. And watching the videos of the Christchurch memorial service, and reading the newspaper clippings sent from home, touched me in a way I had not anticipated nor expected.

I wrote about the memorial services at the time, and subsequently reflected on the loss.

But today, one year on I am left thanking God that, by his mercy and grace, it was not worse than it was and I am reminded of the words of the 46th Psalm.

God is our refuge and strength,
an ever-present help in trouble.
Therefore we will not fear, though the earth give way
and the mountains fall into the heart of the sea…
He says, ‘Be still, and know that I am God;
I will be exalted among the nations,
I will be exalted in the earth.’
The LORD Almighty is with us;
the God of Jacob is our fortress.
Posted by Peter Saunders at 09:26