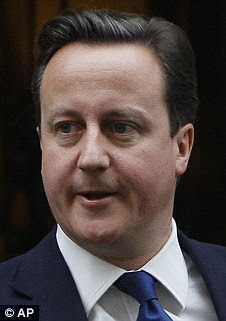 David Cameron was accused yesterday of planning an ‘Orwellian’ act of ‘cultural vandalism’ by an alliance of bishops, Tory MPs and legal figures yesterday over his plans to allow homosexual couples to marry.

The ‘Coalition for Marriage’, a new grass-roots campaign, is seeking hundreds of thousands of signatures on a petition to maintain the current definition of marriage.

But today the Prime Minister said that same sex marriage would be legalized despite growing opposition to a change in the law.

A senior Downing Street source said: ‘Nothing has changed on this as far as he is concerned. He is very passionate about this subject – it is something that has defined him.’

Indeed it has! I have previously catalogued on this blog his long-standing commitment to a radical pro gay rights agenda.

In this stance he is backed up by none other than Tim Montgomerie, editor of the influential Conservative Home blog and founding director of the Christian Conservative Fellowship (CCF), who recently laid out ‘a conservative case for gay marriage’.

Perhaps ironically, David Burrowes MP, current chairman of CCF, who has signalled his intention to oppose the move, has been hounded by local members of his conservative party for his stand and has even received a death threat.

Equalities Minister Lynne Featherstone, a Liberal Democrat in the Coalition Government, said today, ‘We are not changing religious marriage, or requiring religious groups to go against their traditions.’

But in fact this is profoundly misleading. The law makes no distinction between so-called ‘civil’ and ‘religious’ marriage and the government most definitely intends to change the legal definition for all marriages from that which has held sway for the last 800 years, ‘the voluntary union for life of one man and one woman to the exclusion of all others’.

Unlike prominent gay rights (eg. Peter Tatchell, Patrick Strudwick and Martin Robbins) who are very critical of marriage as an institution) Cameron and Montgomerie back same sex marriage because they believe marriage is a good thing.

‘It is because I value marriage so much that I have come to believe it should be extended to gay people and not kept exclusive. Because it is so beneficial an institution it should be enlarged rather than fossilised. Whereas some people see the gay marriage issue as primarily about equal rights, I see it as about social solidarity and stability. Marriage is, for want of a better word, conservatising. I don't mean in a party political sense. I mean it is one of the key social institutions that conservatives admire.’

There are several unstated assumptions in this argument for which David Cameron owes the electorate an explanation.

First, given that this issue is so controversial, why is it that the government is holding a consultation to determine how same sex marriage should be legalized, rather than whether it should be legalized? This is profoundly undemocratic. None of the political leaders who are supporting the legalization of same sex marriage announced it as a priority in their election manifestos and, given the current level of opposition, pressing ahead with legalization will lead to considerable dissension and division. In a recent poll of more than 1,000 adults conducted by Comres, 51% of people agreed that ‘no one has the right to redefine marriage for the rest of us’ and 86% supported the proposition that it is ‘possible to be tolerant of the rights of others and protective of traditional marriage at the same time’. The main pressure for this change is coming from the gay rights lobby. But legalising same sex marriage to appease a small minority is surely wrong and it should not be foisted on the British people without a proper national debate. The Prime Minister, however, intends to deny us that.

Second, what is the evidence that the clear benefits to society that are known to come from marriage will also result from same sex marriage? There is already considerable evidence to show that marriage leads to better family relationships, less economic dependence, better physical health and longevity, improved mental health and emotional well-being and reduced crime and domestic violence. But ‘same sex marriage’, by comparison with traditional marriage, is an unproven and experimental social model. It has been made legal in only ten countries since 2001 and six US states since 2004. There is accordingly very little research data to determine whether or not same sex marriage will produce the social benefits that campaigners claim.

Third, given that all the legal rights of marriage are already available to same sex couples through civil partnerships (The President of the Family Division has described civil partnerships as conferring ‘the benefits of marriage in all but name’!), should we not wait to see what the long term effects of civil partnerships are before embarking on a legal redefinition of marriage that could cost billions and involve amending hundreds of pieces of government legislation? The word ‘marriage’ appears 3,258 times in UK legislation, and introducing same sex marriage is a legal can of worms which cannot be achieved without changing the common and legal definition of the word marriage and other words which define it (eg. ‘husband and wife’, ‘consummation’ and ‘adultery’). These changes will inevitably change the definition and nature of marriage for opposite sex couples by trying to accommodate these two very different kinds of relationship under one legal umbrella. According to an assessment done for gay rights group Stonewall by a former civil servant, the cost of implementing one favoured option would be around £5 billion. How then can this move, which will confer no new legal rights, be a priority for government at a time of economic recession and with so much other important legislation on the agenda?

In the face of such opposition and such serious unanswered questions the Prime Minister is obliged to put more flesh on the bones of why he thinks same sex marriage should be legalized without a national debate over whether it is necessary and without any clear evidence that it will make any difference.
Posted by Peter Saunders at 12:19