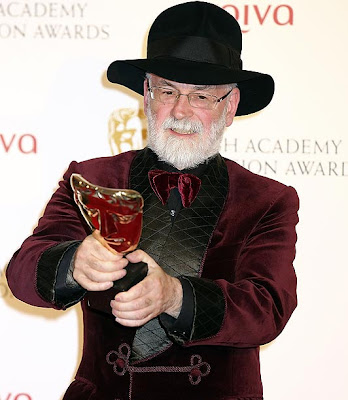 Fantasy novelist Terry Pratchett has won a Bafta for his ‘documentary’ ‘Choosing To Die’, in which he followed a man with motor neurone disease to Switzerland in order to film him killing himself at the Dignitas facility.

The man’s wife, who was clearly very uncomfortable about the whole event, but went along with it out of deference to her husband, was prevented from comforting him as he died by one of the facility staff.

The film generated a huge number of complaints to the BBC.

At a recent meeting where I was speaking a woman told me that she had always supported assisted suicide before seeing the film, but that watching it had caused her to change her mind. She now strongly opposes a change in the law.

Pratchett is one of the celebrity Patrons of Dignity in Dying, the former Voluntary Euthanasia Society, and helped to finance the discredited Falconer Commission into assisted suicide, which was itself conceived by the pressure group.

I have blogged previously about the BBC acting as a cheerleader for euthanasia by supporting films like this and also the dangers of suicide contagion, or the Werther effect, following such depictions.

In another blog I have listed the twenty things that the Pratchett ‘documentary’ did not tell us about euthanasia in Europe.
Posted by Peter Saunders at 14:21