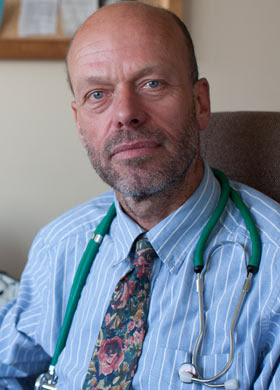 According to a new report from Christian Concern, the General Medical Council (GMC) has today decided to continue disciplinary proceedings against a Christian GP, despite the fact that the patient who made the complaint has refused for two years to give evidence face to face. The BBC has also reported on the case.

Dr Richard Scott, who works at Bethesda Medical Centre in Margate, Kent, was first reported to the GMC in September 2010 for discussing his Christian faith with a patient at the end of a private consultation.

Following the complaint, Dr Scott, was threatened with an Official Warning by the GMC, which he refused to accept.

As well as deciding to continue with the proceedings, the GMC has today also made the extraordinary decision that part of the case will be held in secret. The press and the public will be barred from attending, and Andrea Williams, CEO of the Christian Legal Centre, has been specifically excluded from attending the hearings to support Dr Scott.

In May last year I blogged at length on the case arguing that the GMC had overreacted in its reprimand and also reported on Dr Scott’s later hearing in September.

The complainant, an adult, was originally encouraged to bring the charge by his mother, and has persistently refused to have his evidence challenged.

Dr Scott, supported by the Christian Legal Centre, had argued that his case should be ‘struck out’ on grounds that a fair hearing could not take place with no cross-examination of the complainant face to face.

Yet the GMC has decided to persist with the case with the complainant giving evidence by phone, without any cross-examination.

You can read more detailed reaction from Dr Scott in the article from Christian Concern. He concludes:

‘I am being denied a proper hearing and unless this case is finally decided in my favour, I will be seeking further legal advice as to a Judicial review of the GMC’s handling of its Disciplinary procedures, as the amateur and unjust way this trial is being conducted is an insult to me and to every member of the medical profession.’

Essentially the GMC is arguing that Dr Scott is in breach of its controversial guidance, ‘Personal Beliefs and Medical Practice’ (2008), which it is currently trying to tighten even further to clamp down on faith discussions.

‘You must not express to your patients your personal beliefs, including political, religious or moral beliefs, in ways that exploit their vulnerability or that are likely to cause them distress.’

In other words, there is no blanket prohibition on expressing personal beliefs, as long as it is done in a way that is sensitive and appropriate.

However the new draft (see my commentary) has been revised to read as follows:

(You) ‘may talk about your own personal beliefs only if a patient asks you directly about them or if you have reason to believe the patient would welcome such a discussion (eg. The patient has a Bible or Quran with them or some outward sign or symbol of their belief)’

Now what patient walks into a consultation carrying a Bible or Qur’an, or for that matter, a copy of the Communist Manifesto, or Darwin’s Origin of Species? I have never seen it. The implication seems to be that doctors cannot rely on verbal forms of information gathering to determine what might be important to a patient but must now rely only on non-verbal cues!

And yet the guidance elsewhere gives lip-service to the importance of taking a ‘spiritual history’, which usually would include such questions as ‘where do you find support?’ or ‘Do you have faith that helps you at times like this?’ which are actually an essential component of whole-person care.

Jane O’Brien, the Assistant Director of Standards and Fitness to Practice with the GMC wrote to the Daily Telegraph in February 2009 and made the following points:

This apparent shift by the GMC, which seems to have been fuelled in part by Dr Scott’s case, is consistent with the growing marginalisation of Christian professionals and the rise of militant secularism in Britain’s institutions.

Earlier this year a parliamentary enquiry, ‘Clearing the Ground’, concluded that ‘Christians in the UK face problems in living out their faith and these problems have been mostly caused and exacerbated by social, cultural and legal changes over the past decade.’

I wish Dr Scott all the very best in his endeavours.