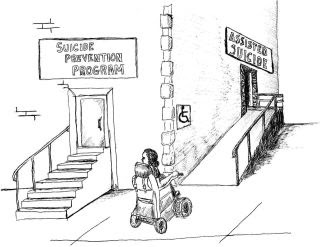 The following article was written Amy E. Hasbrouck, Chair of Not Dead Yet, and published on 9 July in the Montreal Gazette yesterday under the title: 'How about the right to cry for help? Court ruling asserting a person’s right to assisted suicide reflects discriminatory attitudes toward the disabled.'

Not Dead Yet is an international organization of people with disabilities who oppose the legalization of euthanasia and assisted suicide.

The article was prompted by the recent controversial court ruling in British Columbia to declare Canada’s law against assisted suicide unconstitutional but the arguments are relevant everywhere.

For commentaries on the British Columbia ruling and its relevance see recent commentaries by Will Johnston, Margaret Dore and Alex Schadenberg. The ruling is important in a UK context as lawyers representing Tony Nicklinson have sought to use it as evidence in furthering his case.

It has taken me a long time to read through the nearly 400 pages of the June 15 decision of the British Columbia Supreme Court on the issue of assisted suicide. I found reading it to be like a journey to a dark place, full of raw emotions.

The long and the short of the reasons for judgment issued by Justice Lynn Smith is that legal provisions in Canada prohibiting assisted suicide law are unconstitutional because they impede disabled people’s rights to life, liberty and security of the person.

The judge believes that having a disability or degenerative illness is a rational reason to want to die, and that those of us with disabilities should be helped to die if we can’t do it neatly or efficiently ourselves.

Justice Smith doesn’t appear to believe that people with disabilities and terminal illness are ever coerced, persuaded, bullied, tricked or otherwise induced to end our lives prematurely. She believes those researchers who contend there have been no problems in jurisdictions where assisted suicide is legal, and she rejects evidence suggesting there have been problems.

She writes: “It is unethical to refuse to relieve the suffering of a patient who requests and requires such relief, simply in order to protect other hypothetical patients from hypothetical harm.”

I’ll have to mention that to some of my hypothetical friends who say they have been pressured by doctors, nurses and social workers to hypothetically “pull the plug.”

The same goes for all those folks who succumbed to the pressure; I guess they’re only hypothetically dead.

Reading the B.C. court decision is hard as a person with a disability because it’s unpleasant to discover underlying assumptions about people with disabilities.

It’s one thing when a random guy walks up to you on the street and says, “I’d rather be dead than be like you.”

It’s quite another, though, when a Canadian judge says of individuals who may experience such suffering (physical or existential), unrelievable by palliative care, “that it is in their best interests to assist them in hastened death.” Same message, only the judge uses bigger words.

So what of the “suffering” she describes?

Well, a lot of physical pain can be managed by effective palliative care; and sedation is available for the most severe pain. “Existential suffering” is when someone has not come to terms with a disability or terminal diagnosis; that takes counselling, peer support and a desire to get on with one’s life. Of course, coming to terms would be a lot easier if people weren’t telling us we’d be better off dead.

The B.C. Supreme Court has chosen not to listen very closely to disability-rights advocates with more than 20 years of experience battling discrimination; instead, the court relied on the stories of people who have accepted the view that disability is undignified, and that people with disabilities should be given a streamlined path to death whenever they want it and however they want it.

Justice Smith assumes that, because it’s no longer illegal, suicide is somehow an affirmative right; and if you can’t do it the way you want to do it, then you should have the right to have someone do it for you.

But she forgot about the “right to fail;” that more than 90 per cent of suicide attempts are unsuccessful. What about the right to “cry for help?”

The judge also seems to have forgotten about the billions of dollars spent each year on suicide-prevention programs and mental-health care.

Nor does she mention that a non-disabled person who says he wants to kill himself can be committed to a psychiatric hospital against his will.

To put it simply, if a non-disabled person wants to commit suicide, she’s considered irrational and mentally ill, and is treated for depression, or maybe even locked up to prevent her from hurting herself.

But if a disabled person wants to kill herself, she’s told she’s making a reasonable choice, and not only has the right to do so, but is even helped to complete the act so her death is guaranteed where most other suicide attempts fail.

Perhaps the most bizarre part of the decision is the judge’s finding that outlawing assisted suicide somehow deprives people of the right to life. Sure, she has a logical argument to make her point, but using basic common sense, it doesn’t pass the sniff test.

It’s hard enough for those of us with disabilities to deal with architectural and communication barriers, discrimination, inadequate support services and public policies that limit our integration and equality, let alone contending with people who grease the skids to the River Styx.