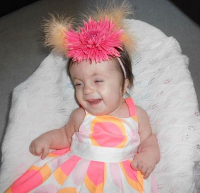 Alex Schadenberg has this last week reported on a new study on children with trisomy 13 and 18 (Patau's and Edwards' syndrome respectively) which is well worth reading. I have reproduced it here. I have myself previously blogged about trisomy conditions including a wonderful testimony.


A research study that was published in the current edition of the Journal Pediatrics found that parents of children with Trisomy 13/18, conditions whereby the child has an extra 13 or 18 chromosome, indicated that the parents considered the child to be happy and found that their lives were enriched by the child.


The findings are very different than that attitude of many pediatricians towards these conditions. The Canadian Press reported:


Medical textbooks are grim and bleak about babies born with genetic codes considered "incompatible with life." But the study says parents who have these children speak of the joy found in what is almost inevitably a short lifespan. These children, they say, can enrich a family rather than destroy it.

Recently I came across the story of Lilliana Dennis (pictured), a child who is living with Trisomy 18. After reading the heartfelt story about Lilliana and the Dennis family I responded by writing an article titled: Trisomy 18 is not a death sentence.

The research study was carried out by Dr. Annie Janvier - specialist in Pediatrics and Ethics at the University of Montreal and Sainte Justine Hospital in Montreal, Barbara Farlow B Eng MBA - patient safety Canada, and Dr. Benjamin Wilfond - Center for Pediatric Bioethics, Seattle Children’s Research Institute and Department of Pediatrics, University of Washington School of Medicine, Seattle, Washington.

The research team invited 503 parents of children who had a Trisomy 13/18 child to participate in the study. 87% of the parents responded and 332 parents (67%) of 272 children completed the questionnaire.

The parents indicated that their physicians stated to them that:

On the positive side, 60% were told by their medical provider that their child would have a short, but meaningful life.


* 30% of the parents had requested a plan of treatment based on "full intervention."
* 79% of the children who received "full intervention" were alive at the time the questionnaire was sent. Those children were a median age of four years old.
* The survival rates for children with "full Trisomy" 13/18 was 40% lived for at least 1 year while 21% lived to at least age 5.

The article in the Canadian Press interviewed Barbara Farlow, one of the authors of the study. Farlow, the mother of a child who had Trisomy 13 stated:


"We didn't want our daughter to live on life support or to suffer. But if she had a chance to live comfortably and be happy . . . then we were willing and able to care for her, despite her limitations,"

Annie lived for 80 days. When an illness brought her back into hospital and she stopped breathing, the staff was slow to try to resuscitate her, despite her parents' wishes. Later, Farlow and her husband discovered Annie's medical file had a DNR — do not resuscitate — order on it, even though they hadn't authorized it.

Dr Annie Janvier stated to the Canadian Press that:


"What we predicted as doctors happening to all these families didn't happen," says Janvier, who admits the findings are receiving a lukewarm response in some quarters.


"I just want to show that these kids mean something to their parents, ... And they seem like they have a quality of life that's acceptable. Doctors are not torturing them. We're not giving them undue pain. And they should be treated as unique children."

"There is a broader range of survival and experiences than providers know. The parents may be getting this information online and clinicians may need to rethink what they say to parents, I think the point of our paper is to say these are quite serious conditions, but saying it's hopeless is inconsistent with reality."

I have known Barb Farlow and her family for several years. I have learned, through Barb, much about the lives of children with Trisomy conditions. It is my hope that society will break-through the negative bias towards children with profound disabilities, such as Trisomy 13/18. Everyone is a unique human being and people with disabilities offer other people the opportunity to accept and understand the true meaning of dignity. Hopefully this study will create new opportunities for families and the children with disabilities.

More information can be found at: http://www.trisomy.org/
Posted by Peter Saunders at 04:02

Email ThisBlogThis!Share to TwitterShare to FacebookShare to Pinterest
Labels: Disability