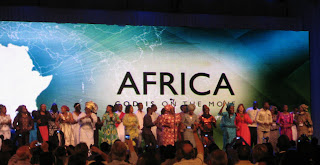 OK I’m probably going to demonstrate how out of touch I am with contemporary Christian music with this post but here are three songs written I think in 2008 and 2009 which I was not previously aware of and first heard at ICMDA events this year.

I’ve just got back from the first ICMDA Pan-Africa Congress in Lagos, Nigeria with 1,700 Christian doctors and medical students from over ten countries.

It was wonderful - great teaching, worship and fellowship – and one of the highlights was the ‘Africa Night’ where everyone (with the exception of we Europeans!) turned up in full traditional African dress. Three hours of singing and dancing ensued led by various national groups and almost all of very high quality.

Two songs that featured – one African and one ‘European’ – stuck out for me.

Father’s Love Letter (‘Come see’) by Michael Smith was performed alongside a moving stage drama featuring people in desperate situations being touched and transformed by God’s grace. The words and chord progressions are simple and measured but they paint a beautiful picture of redemptive love and forgiveness.

There are several versions on the internet but this version uses Scripture very effectively and this one too is well crafted. It is amazing they have had so few views but my kids hadn't heard the song either so maybe it is just not that well known. (Lyrics and chords)

Tambira Jehovah ('Come and dance to the Lord') is a popular Zimbabwean song. There are two versions on the internet but this is the one we sang (which is think is by far the better one). We only did the basic chorus in the original language and English, the part up to 1m 45s in the video (over and over again!).

It comes with easy actions which you can pick up from the dancers (longer version of lyrics here). You will have to work out the chords for yourself - those on the net all seem to be for the other version - but it should not be difficult.

Finally is ‘You’re beautiful’ by Phil Wickham, which I’m not sure how I missed. I first heard it at the ICMDA Eurasia leaders’ conference in Denmark this May and again at my son’s best friend’s wedding in Cardiff this month.

Here are the video, lyrics and chords.

If you like these songs as much as I do and your church doesn’t currently sing them then maybe you could bring them to the attention of your worship leader!

Enjoy and pass it on.