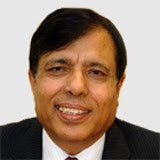 The BMA reports Dr Chand as saying that he will continue to ‘champion the principles of universal healthcare that have made the NHS such an envy of the world’.

This is what we would expect.

However it does not tell us that Dr Chand is a staunch advocate of legalising both assisted suicide and euthanasia.

He attempted to get the association to back legalising ‘assisted death’ (which for him means both euthanasia and assisted suicide) at the BMA annual representative meeting in 2009.

His motion, which was soundly defeated, read as follows:

‘This meeting supports the introduction of legislation to allow people who are terminally ill but 'mentally competent', the choice of an assisted death. Further, the law should not criminalise people who accompany those who make rational decisions to end their suffering’

He told me personally at the time that he was determined to move the position of the BMA and would be trying again.

He has since joined the pro-euthanasia lobby group ‘Health Professionals for Assisted Suicide’ (HPAD) which operates as the medical arm of the former Voluntary Euthanasia Society, now rebranded ‘Dignity in Dying’ (DID).

However, whilst DID and HPAD have always said that they back only assisted suicide (helping people kill themselves) and not euthanasia (killing people directly), Dr Chand has made it very clear in a recent BMA blog that his ambitions are more far-reaching.

He boldly declares, ‘We must enact legislation to decriminalise acts of euthanasia and physician-assisted suicide, for the following compelling reasons’, and then gives a list of ‘reasons’ that could have been cut and pasted from the DID website.

I wonder if Dr Chand has declared these ‘interests’ to BMA Council or BMA members whom I’m sure would be very interested to know about them.

Meanwhile the BMA itself remains firmly opposed to any change in the law and has never supported the legalisation of either euthanasia or assisted suicide throughout its 180 year history.

With the government last week appointing two health ministers who have since declared their support for legalising assisted suicide (Anna Soubry and Norman Lamb) and Lord Falconer and Margo Macdonald about to introduce new bills in the House of Lords and Scottish Parliament respectively it appears that we are in for a very interesting few months.

I for one will be watching Dr Kailash Chand very carefully indeed.
Posted by Peter Saunders at 07:00