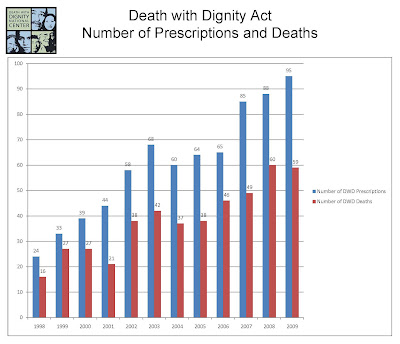 Members of the pro-euthanasia movement frequently point to the US state of Oregon, which legalised assisted suicide in 1997, as a model which Britain should follow.

Lord Falconer and Margo Macdonald MSP are two British politicians who have frequently sung the praises of Oregon which allows assisted suicide for mentally competent adults with less than six months to live (although Falconer’s and Macdonald’s recently proposed bills to be debated in the New Year are much more lax on their definition of ‘terminally ill’).

I have previously blogged about the huge increase in assisted suicide cases in Oregon since legalisation (see graph), the shroud of secrecy which surrounds assisted suicide practice there and the worrying trends in neighbouring Washington state which enacted a similar law more recently.

I was therefore interested to see on Margaret Dore’s ‘Choice is an Illusion’ site recently evidence of how the Oregon Health Plan is steering patients to suicide. Dore is an attorney in Washington.

The Oregon Health Plan is a government health plan administered by the State of Oregon.

If assisted suicide were to be legalised in Britain, a similar pattern could well ensue. If so, the taxpayer will pay for a patient to die, but not to live.

In a recent poll by Communicate Research 60% of Tory MPs said they believed that legalising assisted suicide in the current economic climate would increase the risk that vulnerable people might opt for suicide so as not to be a financial burden upon loved ones.

78% agreed that if doctors are allowed to prescribe lethal drugs to patients on request, vulnerable people could feel under pressure to opt for suicide.

The full text of Dr Stevens affidavit is here. It concludes as follows:

1. I am a doctor in Oregon USA where physician-assisted suicide is legal. I am also a Professor Emeritus and a former Chair of the Department of Radiation Oncology, Oregon Health & Science University, Portland, Oregon. I have treated thousands of patients with cancer.

2. In Oregon, our assisted suicide law applies to patients predicted to have less than six months to live. I write to clarify for the court that this does not necessarily mean that patients are dying.

3. In 2000, I had a cancer patient named Jeanette Hall. Another doctor had given her a terminal diagnosis of six months to a year to live, which was based on her not being treated for cancer. I understand that he had referred her to me.

4. At our first meeting, Jeanette told me plainly that she did not want to be treated and that was going to "do" our law,i.e., kill herself with a lethal dose of barbiturates. It was very much a settled decision.

5. I, personally, did not and do not believe in assisted suicide. I also believed that her cancer was treatable and that her prospects were good. She was not, however, interested in treatment. She had made up her mind, but she continued to see me.

6. On the third or fourth visit, I asked her about her family and learned that she had a son. I asked her how he would feel if she went through with her plan. Shortly after that, she agreed to be treated and she is still alive today. Indeed, she is thrilled to be alive. It's been twelve years.

7. For Jeanette, the mere presence of legal assisted suicide had steered her to suicide.

8. Today, for patients under the Oregon Health Plan (Medicaid), there is also a financial incentive to commit suicide: The Plan covers the cost. The Plan's "Statements of Intent for the April 1, 2012 Prioritized List of Health Services," states: "It is the intent of the [Oregon Health Services] Commission that services under ORS 127.800-127.897 (Oregon Death with Dignity Act) be covered for those that wish to avail themselves to those services."

9. Under the Oregon Health Plan, there is also a financial incentive towards suicide because the Plan will not necessarily pay for a patient's treatment. For example, patients with cancer are denied treatment if they have a "less than 24 months median survival with treatment" and fit other criteria. This is the Plan's "Guideline Note 12."

12. All such persons who fit within "Guideline Note 12" will nonetheless be denied treatment. Their suicides under Oregon's assisted suicide act will be covered.

13. I also write to clarify a difference between physician-assisted suicide and end-of-life palliative care in which dying patients receive medication for the intended purpose of relieving pain, which may incidentally hasten death. This is the principle of double effect. This is not physician-assisted suicide in which death is intended for patients who may or may not be dying anytime soon.