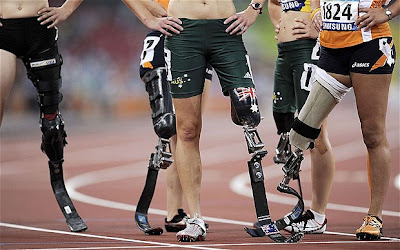 I am one of nine joint signatories to a letter in the Daily Telegraph today arguing that the success of the Paralympics should trigger a rethink of Britain’s abortion laws to make it illegal to terminate a pregnancy solely on grounds that a child will be born disabled.

We describe the practice of aborting foetuses on physical grounds as a form of ‘eugenics’ and say that while pregnancies can be terminated even up to 40 weeks on physical grounds in certain circumstances, the moment the child is born a ‘moral volte-face’ is performed and the official approach is ‘full of compassion’.

This we argue is deeply hypocritical and discriminatory.

Abortion is legal in the first 24 weeks of pregnancy in Britain if the pregnancy poses a risk to the mother’s mental or physical health greater than that from having an abortion. But after 24 weeks, an abortion is allowed only if there is substantial risk of ‘serious’ physical or mental abnormality.

The letter is the basis of a long article in the same issue of the paper which is well worth reading.

The full letter (accessible on Telegraph website – you need to scroll down from here) is titled ‘Disability Hypocrisy’ and reads as follows :

SIR – A special-needs child in the womb can be aborted at up to 40 weeks. But once he or she is born, we do a moral volte-face and become full of compassion.

The recent Paralympics made this contradiction yet more glaring. The athletes produced such astonishing examples of courage and triumph over disability that we now have to rethink what we mean by ‘disabled’ and ‘able’.

Eugenic abortion is bad medicine. Killing people with disabilities, rather than striving to support and care for them, is contrary to the high principles of medicine.

We should be proud of Britain’s unique programme of children’s hospices and Zoe’s Place baby hospices. These are an example of a positive, civilised response to the challenge of disability.

We encourage Parliament to repeal the discriminatory section of the Abortion Act 1967, which allows eugenic abortion up to birth, and instead to promote research into disabilities which, once diagnosed, currently amount to a prenatal death sentence.

The signatories are organisational leaders and include Peter Elliott, a businessman who founded the Down Syndrome Research Foundation UK, after the birth of his son, David, in 1985.

I have recently drawn attention on this blog to the frightening attitudes to disability revealed in responses to a Daily Mail article on abortion of IVF babies for Down’s syndrome.

Between 2002 and 2010 there were 17,983 terminations on the grounds that there was a ‘substantial risk’ that the babies would be ‘seriously handicapped’ — known as Ground E abortions. The overwhelming majority of these were compatible with life outside the womb.

There were also 128 terminations in 2010 for the nervous disorder spina bifida, including 12 after 24 weeks.

There is no doubt that bringing up a child with special needs involves substantial emotional and financial cost, and yet at the very heart of the Christian gospel is the Lord Jesus Christ who chose to lay down his life to meet our own 'special needs'. The Apostle Paul tells us that Christ died for us 'when we were powerless' (Romans 5:6) and that 'bearing one another's burdens' is at the very heart of Christian morality (Galatians 6:1).

The way we treat the most vulnerable in our society speaks volumes about the kind of society that we are and the current abortion law clearly discriminates against disabled people. It should be revised.
Posted by Peter Saunders at 05:48