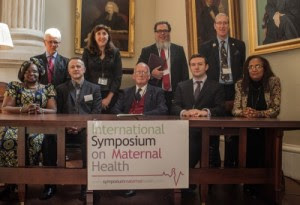 Leading medical experts speaking at a major International Symposium on Excellence in Maternal Healthcare held in Dublin have concluded that ‘direct abortion is not medically necessary to save the life of a mother’.

About 140 Irish medical professionals participated in the symposium which featured a panel of world-renowned experts in the fields of mental health, obstetrics and gynecology, and molecular epidemiology.

The symposium expert committee released its conclusions in the Dublin Declaration on Maternal Healthcare, which states:

‘As experienced practitioners and researchers in Obstetrics and Gynaecology, we affirm that direct abortion is not medically necessary to save the life of a woman.

We uphold that there is a fundamental difference between abortion, and necessary medical treatments that are carried out to save the life of the mother, even if such treatment results in the loss of life of her unborn child.

We confirm that the prohibition of abortion does not affect, in any way, the availability of optimal care to pregnant women.’

Professor Eamon O’Dwyer, chairman of the Committee for Excellence in Maternal Healthcare, said that the Dublin Symposium cleared up misinformation and provided ‘clarity and confirmation’ to doctors and legislators.

‘Irish Obstetricians and Gynaecologists have previously pointed out that treatment for conditions such as ectopic pregnancy are not considered abortion by doctors, yet misinformation in regard to this abounds in public debate. The Symposium clarifies that direct abortion is never medically necessary to save the life of a woman, and that’s good news for mothers and their babies,’ he said.

International experts at the symposium applauded Ireland’s impressive track record on maternal health care. According to UNICEF, the nation consistently boasts one of the lowest maternal mortality rates in the world (#1 in 2005, #3 in 2008).

The new Declaration comes in the wake of figures released by the Department of Health last month which showed that of the over 6 million abortions committed in England and Wales since legalisation in 1967, just 0.006 percent were performed with the intention of saving the life of the mother or preventing serious injury.

I have previously argued that direct abortion to save the life of the mother is vanishingly rare. This new declaration is saying that it is not medically necessary at all.

Talks from the conference are available on you tube