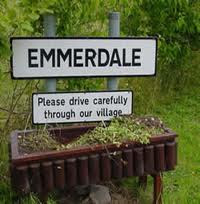 Emmerdale actors Pauline Quirke and Danny Miller - who were at the heart of a controversial assisted suicide storyline in the soap - have been shortlisted for a string of gongs at this year’s Inside Soap Awards.

Viewers saw their characters, Hazel Rhodes and Aaron Livesy, being asked to help end the life of Jackson Walsh, played by Marc Silcock, after he was left paralysed in an accident.

I am not an Emmerdale fan but I was interested to see the way the Soap is continuing to develop the story following the assisted suicide of a character with spinal injury.

However, as I later commented, it appears since to have taken a more realistic view about the huge ramifications for the lives and relationships of those left behind after an assisted suicide.

A report in the Daily Mirror, ‘Emmerdale: Aaron and Hazel struggle to come to terms with Jackson's assisted suicide’, has described some of the ensuing chaos.

And now Aaron is resorting to self-harming. Miller has recently described his character’s reaction:

‘He’s still very angry about everything. He thinks he and Hazel should have given Jackson longer to adapt to his altered life, although Jackson was pleading to die. Aaron loathes himself and he won't let anyone in to help him. The self-harming is how he's dealing with this… He’s so full of self-hatred nothing else matters. He won't stop this until someone steps in.’

The BBC, which has been justifiably called a ‘cheerleader for assisted suicide’ by portraying it in a positive light, could learn some lessons from Emmerdale.
Posted by Peter Saunders at 15:40