There’s been an interesting interchange this week between Anglican Archbishops in the UK and Africa over laws regulating homosexual behaviour.

In Uganda, a bill allowing for greater punishments for people involved in homosexual acts, and those who fail to turn them in to police, has been passed by parliament, but blocked - for now - by President Yoweri Museveni.

This week the Archbishops of Canterbury and York (Justin Welby and John Sentamu) wrote to all Primates of the Anglican Communion and to the presidents of Nigeria and Uganda, after being asked about laws penalising homosexuality (full text here).

The letters have come in the same week that the College of Bishops has released its initial response to the Pilling report which controversially recommended the use of services to ‘mark’ same sex unions.

The House of Bishops have not taken this latter recommendation up but have taken up Pilling’s suggestion of initiating ‘facilitated conversations’ across the Church of England and in dialogue with the Anglican Communion and other churches ‘so that Christians who disagree deeply about the meaning of scripture on questions of sexuality, and on the demands of living in holiness for gay and lesbian people, should understand each other's concerns more clearly and seek to hear each other as authentic Christian disciples’.

This statement interestingly begs the key question of whether a person who participates in homosexual acts, or teaches that such acts are admissible, can actually claim to be an authentic Christian disciple.

In this context Archbishop Stanley Ntagali’s full statement is well worthy of study.

He says that the Church of Uganda is encouraged by Uganda’s Parliament amending the Anti-Homosexuality Bill to remove the death penalty, to reduce sentencing guidelines and to remove the clause on reporting homosexual behaviour. In this he is supporting Welby and Sentamu in their legitimate concern that Christians be committed to the 'pastoral support and care of homosexual people'.

But he then reminds the Archbishops of Canterbury and York as they lead their own church through the ‘facilitated conversations’ recommended by the Pilling Report, that the teaching of the Anglican Communion from the 1998 Lambeth Conference, from Resolution 1.10, still stands. It states that ‘homosexual practice is incompatible with Scripture,’ and the conference ‘cannot advise the legitimising or blessing of same sex unions nor ordaining those involved in same gender unions’.

In this he really cuts to the chase. Welby and Sentamu’s statement fails both to make a clear distinction between homosexual attraction and homosexual behaviour (see my previous discussion here) and also to make it clear that homosexual acts are morally wrong. These are in my view unfortunate and serious omissions. 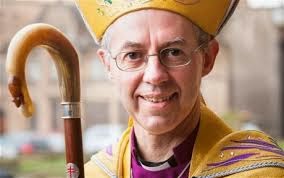 Ntagali also calls on the Archbishop of Canterbury to withhold invitations for the 2018 Lambeth Conference from the Episcopal Church in the USA and the Anglican Church of Canada in view of the fact that they have ‘violated’ Lambeth Resolution 1.10.

This he says, would be a ‘clear signal’ of Justin Welby’s ‘intention to lead and uphold the fullness of the 1998 Lambeth Resolution 1.10’.

Archbishop Ntagali has put his finger on the key issue.

As I have previously argued on this blog, it is not enough for church leaders simply to affirm a biblical position on homosexual behaviour. Christian leadership also involves ensuring that those who teach in our churches hold to a position on this issue that is consistent with Scripture. There is, in other words, a responsibility to exercise godly discipline.

The Bible is very clear that homosexual practice in particular, as well as being included within the boundaries of sexual immorality (porneia), is also a specific marker of a society that has turned its back on God – Genesis 19, Judges 19 and Romans 1 are familiar examples.

Furthermore there is a grave warning in 1 Corinthians 6:9,10 that ‘men who have sex with men’ (along with other unrepentant sinners) will not ‘inherit the kingdom of God’. Revelation 21:8 and 22:15 confirm that the unrepentant sexually immoral are destined for the lake of fire and will not partake of the tree of life.

The book of Hebrews (10:26) tells us that ‘if we deliberately keep on sinning after we have received the knowledge of the truth, no sacrifice for sins is left, but only a fearful expectation of judgment and of raging fire that will consume the enemies of God’.

All sexual acts outside marriage (including all homosexual acts) are viewed very seriously indeed in Scripture but false teaching which leads people into sexual sin is viewed even more seriously (Luke 17:1-2) and warnings about the affirmation and endorsement of sexual immorality (2 Peter 2 and Jude are poignant examples) are particularly strong.

The Apostle Paul urged his co-workers to ‘command certain men not to teach false doctrines’ (1 Timothy 1:3) and to ‘gently instruct in the hope that God will grant repentance’ (2 Timothy 2:25). He added that false teachers ‘must be silenced’ (Titus 1:11).

These biblical standards of leadership apply to all of us who exercise leadership within the Christian Church.

The real test of Justin Welby’s leadership of the Church of England will be whether or not he allows the current situation - whereby senior leaders in his church both in these islands and across the Atlantic are teaching that homosexual acts are sometimes acceptable - to smoulder and fester.

If he fails to grasp this nettle in the interests of ‘unity’ he may find himself presiding over a greatly reduced Anglican communion. I believe he will also find himself on the wrong side of history. But to deal with it firmly and graciously will require not only the wisdom of Solomon, but also the courage of Daniel.


He needs our prayers. But he also needs other Christians within his own denomination to help him be faithful, in both word and deed, to the teaching of Jesus Christ and the Apostle Paul on this matter.
Posted by Peter Saunders at 14:36