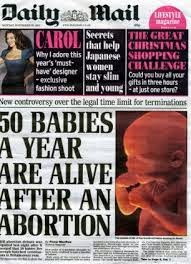 The problem of how to deal with babies born alive after abortion has been highlighted by a question asked at the Council of Europe.

The Committee of Ministers has been asked to act ‘in order to guarantee that foetuses who survive abortions are not deprived of the medical treatment that they are entitled to - as human persons born alive - according to the European Convention on Human Rights’.

The question is highly relevant in view of a story in the Daily Mail which claimed that 66 babies survived NHS termination attempts in one year alone.

The figure came from the CEMACH 2007 Perinatal Mortality report which covers the year 2005. It carries the said figures on page 28. I quote:

I have checked the CEMACH reports for 2009 and 2011 (covering 2007 and 2009 respectively) and found no similar reference, but in the latter a diagram on page 51 (figure 6.2) does say that figures of early neonatal deaths following termination of pregnancy have been (deliberately) excluded.  The strong implication is that they are still happening, but just not being reported.

An article in Prolife Ireland this week reports that the problem also exists in other countries, including Sweden and Italy, where in 2010 a 22 week ‘foetus’ was found alive 20 hours after being aborted. The baby was then placed in intensive care, where he died the next day. It further reports:

‘Another child in Florence survived three full days after having been aborted. Such events are happening everywhere that late term abortions are allowed, but are rarely reported and made public…. To prevent these situations, Norway decided at the beginning of January to prohibit abortion completely after 22 weeks, the threshold of viability outside the uterus as determined by the World Health Organisation.’

The Committee of Ministers will provide a written response to this question in the coming weeks.
But given that abortion is legal up until 24 weeks in Britain, it seems inconceivable that babies are not still being born alive after abortion here. But clearly whoever knows the facts is keeping quiet.


Perhaps someone should ask some questions in the Westminster parliament too.
Posted by Peter Saunders at 06:08