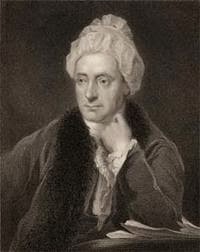 William Cowper (1731-1800) was the leading poet of the evangelical revival in the 18th century. He was also for a brief period associated with our church in St Albans and was converted within 50 meters of the front door.

In 1763 Cowper suffered a severe bout of depression. His brother John placed him into the care of Dr Nathaniel Cotton who ran a private hospital in his house known as the Collegium Insonorum which stood on the corner of what is now College Street and Lower Dagnall Street.

Dr Cotton was a great friend of Dr Samuel Clark, the minister of the chapel in Dagnall Lane where our predecessors met before our present church building was erected (the current building is just around the corner in Spicer Street so one walks past the site of Cotton’s home walking the 60 or so metres from one site to the other).

Dr Cotton used to leave Bibles opened at strategic places around the house and in this way it was in reading Romans 3:25 that Cowper was delivered from the gloom of terror and despair to comfort and delight in knowing Christ ‘whom God hath set forth to be a propitiation through faith in His blood, to declare His righteousness for the remission of sins that are past, through the forbearance of God.’

Cowper described his reaction: ‘Immediately I received the strength to believe it, and the full beams of the Sun of Righteousness shone upon me. I saw the sufficiency of the atonement He had made, my pardon sealed in His blood, and all the fullness and completeness of His justification. In a moment I believed, and received the gospel.’ 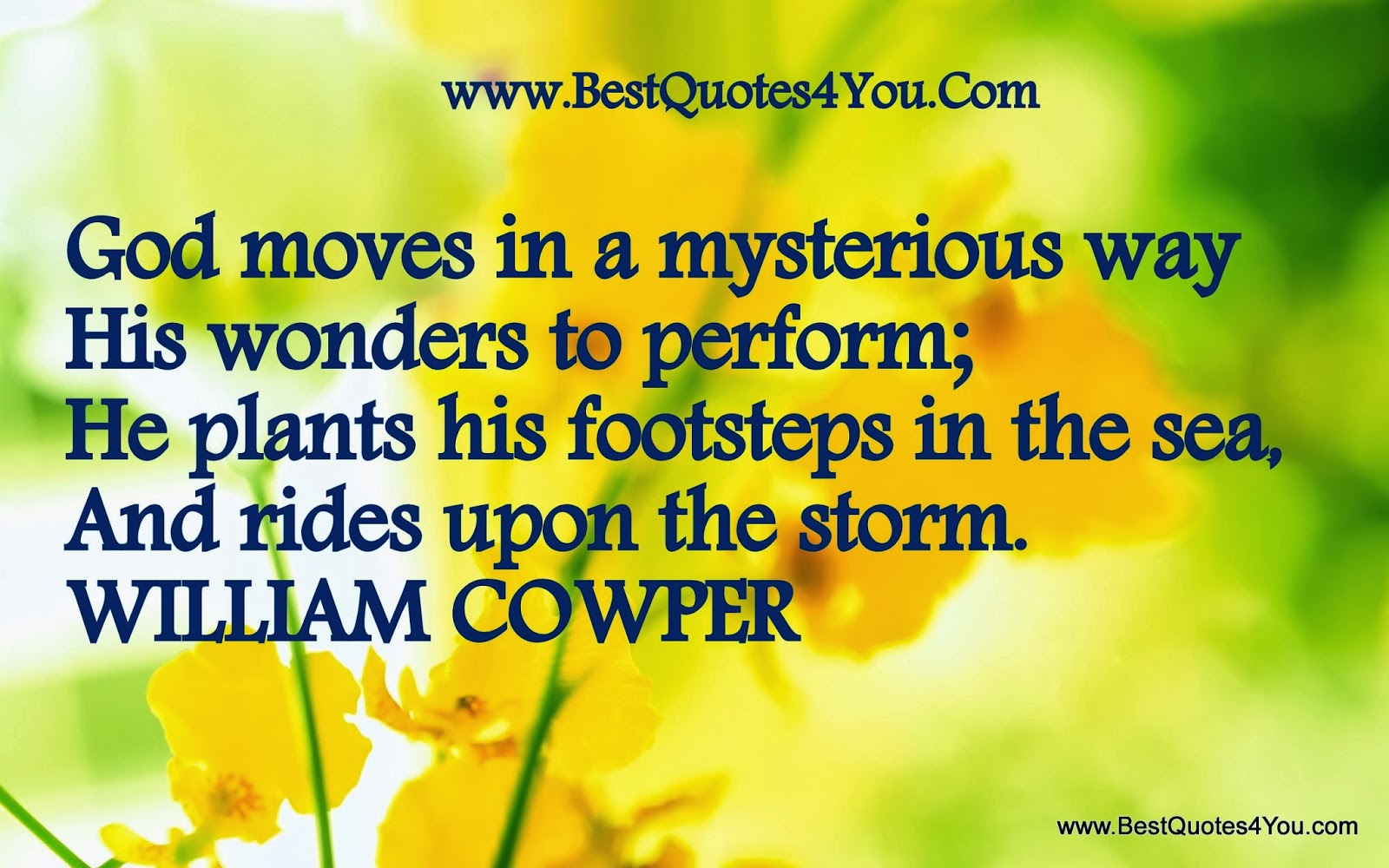 Later he was to pen such hymns as ‘God moves in a mysterious way’ and ‘There is a fountain filled with blood’ which are still sung in many churches today.

But Cowper’s conversion did not mean that he was permanently delivered from his depression. In fact he suffered four serious episodes throughout his life and attempted unsuccessfully on several occasions to commit suicide. He often suffered periods of profound doubt and after a dream in 1773 believed that he was doomed to eternal damnation.

It is not difficult to identify possible triggers to his illness. Cowper’s mother died when he was four years old and his father, with whom he never had a good relationship, sent him shortly afterward to boarding school. Later he was prevented by his uncle from marrying his cousin Theodora, with whom he was very much in love and had enjoyed a close relationship for five years. He never saw her again and neither of them ever married although she secretly supported his work financially through an intermediary. And he lived at a time when the clinical treatment of depression was far more rudimentary than it is now.

After leaving St Albans Cowper moved to Huntington where he was to meet Mary Unwin, later widowed after her husband was killed in a fall from a horse, and John Newton: former slave-trader, pastor and author of the hymn ‘Amazing Grace’. 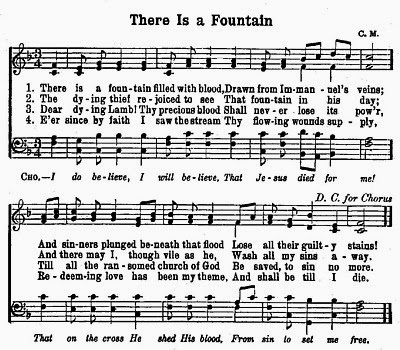 Unwin and Newton took Cowper under their wings and were a wonderful support to him in the years to come, enabling him to function to the level he did and grace us with his legacy of wonderful poetry and hymns.

Recently, on a long run, I listened again to John Piper’s excellent reflections on Cowper’s life, ‘Insanity and Spiritual Songs in the Soul of a Saint’.

I highly recommend the audio (I have listened to it several times already), but particularly wanted to recommend Piper’s six ‘lessons’ about mental illness in Christians, and to add a seventh of my own.

2. We must love children and keep them close to us and secure with us. John Newton lost his mother just like Cowper. But he did not lose his father in the same way. In spite of all the sin and misery of those early years of Newton's life, there was a father, and who can say what deep roots of later health were preserved because of that. Let us be there for our sons and daughters. We are the crucial link in their normal sexual development and that is so crucial in their emotional wholeness.

3. May the Lord raise up many John Newton's for us, for the joy of our churches and for the survival of the William Cowpers among us and in our churches. Newton remained Cowper's pastor and friend the rest of his life, writing and visiting again and again. He did not despair of the despairing. After one of these visits in 1788 Cowper wrote: ’I knew you; knew you for the same shepherd who was sent to lead me out of the wilderness into the pasture where the Chief Shepherd feeds His flock.’

4. In the very research and writing of this lecture I experienced something that may be a crucial lesson for those of us given to too much self-absorption and analysis. I devoted about three days from waking till sleeping to William Cowper, besides leisurely reading of his poetry up till that time. Those three days I was almost entirely outside myself as it were. Now and then I ‘came to’ and became aware that I had been absorbed wholly in the life of another (which)… seemed to me extremely healthy… For the most part mental health is the use of the mind to focus on worthy reality outside ourselves.

5. The first version of this lecture was given in an evening service at Bethlehem Baptist Church. It proved to be one of the most encouraging things I have done in a long time. This bleak life was felt by many as hope-giving. There are no doubt different reasons for this in the cases of different people. But the lesson is surely that those of us who teach and preach and want to encourage our people to press on in hope and faith must not limit ourselves to success stories. The life of William Cowper had a hope-giving effect on my people. That is a very important lesson.

6. Let us rehearse the mercies of Jesus often for our people, and point them again and again to the blood of Jesus. These were the two things that brought Cowper to faith in 1764. In John 11 (the story of Jesus and Lazarus) he ‘saw so much benevolence, mercy, goodness, and sympathy with miserable men, in our Saviour's conduct, that I almost shed tears’. And on the decisive day (of his conversion) he said, ‘I saw the sufficiency of the atonement He had made, my pardon sealed in His blood, and all the fullness and completeness of His justification’. 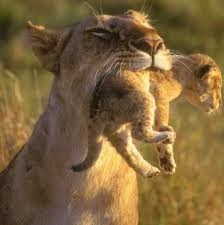 And my seventh point? Don’t take feelings, dreams and ‘revelations’ too seriously, but rather test them all by Scripture. Cowper was best when he took God at his word, trusting his sure promises in the Bible, rather than placing his trust in his fickle feelings and a dream which it sounds had its origin in the depths of his wounded psyche or in the pit of hell itself.
As the Apostle Paul reminds us, ‘If we are faithless, He remains faithful, for He cannot deny
Himself’ (2 Timothy 2:13).

Our eternal security lies ultimately in the faithfulness of God. Although we may feel at times like baby monkeys clinging on to God for dear life through the storms of our existence - at any moment at risk of losing our grip - our real situation, regardless of how we might feel, is more like that of baby kittens secure in the faithful grip of their mother’s jaws.