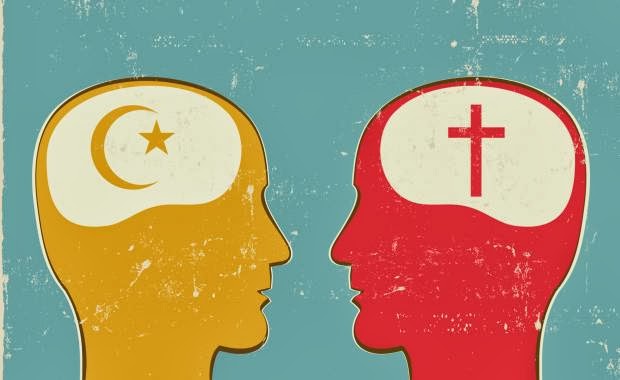 Both Christianity and Islam have been tremendously influential in world history. About one quarter of the world’s population at least nominally, would regard themselves as Christians. One in five would call themselves Muslims.

Yet for most of the last thirteen centuries the two religions have developed in parallel in separate parts of the world. Islam has mainly been centred in the Middle East, North Africa, Central Asia, Turkey, India and South East Asia (especially Indonesia and Malaysia). By contrast Christianity has been confined largely to Europe, North and South America, Africa and the former Soviet Union. And yet both have been, and still are, growing rapidly.

Now, perhaps for the first time in world history, Christians and Muslims can meet and exchange views in a way that they’ve never been able to before. This is especially possible in schools, university forums and on the internet where Muslim Christian dialogue is taking place on an unprecedented scale.

In many ways Muslims and Christians find themselves as co-belligerents in a common battle against the modern world. The West is now not Christian but rather post-Christian and post-modern. It’s characterised by an obsession with media technology (consumerism and entertainment), a radical relativism which asserts that we can all have our own private truth, an ego-centrism (which looks after number one) and a religious pluralism which asserts all religions are the same. This way of thinking has led to escapism and cynicism in society generally.

By contrast both Christianity and Islam find themselves running against this ideology. They share a concern for community, service and absolute truth: involvement rather than escapism, hope as opposed to cynicism. While postmodern society holds that man is simply a clever monkey, the product of matter, chance and time in a Godless universe, Muslims and Christians are together in asserting that man was made to enjoy a relationship with God.

There are obviously strong differences between the truth claims of Islam and Christianity – especially with regard to the person, words and work of Jesus Christ – but it’s also useful to map out our common ground. Here there are seven common strands clearly evident.

First, Islam and Christianity share a common ethical code, one which underlies respect for marriage, a belief in the sanctity of life, and a respect for property. The Ten Commandments of the Old Testament are very similar to Islamic ethics and as Christian doctors we find ourselves agreeing with Muslims on many ethical issues. For example members of the Christian Medical Fellowship work together with members of the Islamic Medical Association within Care Not Killing, which campaigns against the legalisation of euthanasia.

Second, Christianity and Islam share a common geography and history. The two religions date back to the Middle East and in particular come together in the person of Abraham and his two sons, Ishmael and Isaac.

Third, we share a belief in one God. This may seem a surprise to Muslim readers, but both the Old and New Testaments of the Bible assert God’s oneness. ‘The Lord is one’ says Deuteronomy 6:4. ‘There is One God…’ says 1 Timothy 2:5.

Fourth, we share a belief in prophets – men throughout history chosen as God’s mouthpiece who spoke God’s Word. Many of these prophets are shared in both religious traditions. For example: Moses who brought us the Torah (Taurat), David who brought us the Psalms (Zabur), and of course Jesus who preached the Gospel (Injil). There are several other biblical prophets who are also mentioned in the Qur’an.

Fifth, we share a belief in angels: heavenly beings who are used as God’s messengers throughout history. Gabriel in particular plays a prominent place in both religions. Muslims believe that Muhammad was visited by Gabriel and of course Christians believe that Gabriel appeared to Mary to announce the birth of Jesus Christ.

Sixth, we share a belief in Scriptural authority. We accept that God’s revelations throughout history have been recorded in books, and while we may disagree about the degree of divine inspiration of the various books in our religious traditions, we nonetheless both share a profound respect of the authority of ‘Scripture’.

Seventh and finally, we share a belief in the day of judgment. Both, Christians and Muslims, hold that on this day God will divide everyone who has lived on our planet into two groups; one group consigned to heaven (paradise) and the other group consigned to hell. While we differ on the criteria by which that judgment will be made, we nevertheless concur on the fact that there are only two possible destinations for human beings after death.


As a basis for dialogue aimed at establishing the truth, it is worthwhile first to acknowledge these convictions that are held in common by Christians and Muslims and are not shared by atheists - matters on which Islam and Christianity are right and atheism is wrong.
Posted by Peter Saunders at 01:11