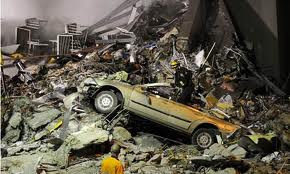 Like many New Zealanders I’ve found the six weeks since the Christchurch earthquake on 22 February quite surreal.

Now, one and a half months on, when we have since witnessed the tragedy of the Japanese tsunami, and reflected again on the far greater loss of life in other recent disasters – the Indian Ocean tsunami, the Kashmir and Haiti earthquakes (all of which CMF responded to with personnel and finance) – I am left wondering why this particular tragedy has gripped me so deeply.

I didn’t lose any friends or relatives in the quake. One by one they were all found to be alive and well, although all with their own stories of ‘that day’ to tell. I’m not aware even of any that were injured, although there were some very near misses and some, especially Christian medical colleagues, have been involved in treating victims, in the rebuilding and in planning the longer term public health strategy.

I guess we all feel it more acutely when it involves the personal and familiar. But amidst the feelings of loss and grief, I have also felt proud to be a New Zealander, and proud at the way my nation has responded. And more that ever I have wanted to be amongst my fellow Kiwis who can understand and share the pain in a way that others cannot be expected to.

Just to stand with 5,000 Kiwis at the Westminster Cathedral remembrance service in London, although I saw no one there I knew personally, was quite special. To be at Twickenham last week with my family to see my home team the Canterbury Crusaders, playing here because their home stadium had been destroyed, was a profoundly moving experience. And watching the videos of the Christchurch memorial service, and reading the newspaper clippings sent from home, touched me in a way I had not anticipated nor expected.

I wrote about the memorial services some days ago, but I’ve linked and quoted below a few other tidbits about the Christchurch service and the game that fellow Kiwis (and others) might enjoy.

‘Never mind the heat, this was truly a special day’ – some quotes:

‘Prince William was very giving of himself. He spent oodles of time with the rescue workers, the service people and with the crowds. His speech was one of the star moments of the day. He hit exactly the right spot with us all. Make this man king right now. Let's move on. William praised New Zealanders as having again displayed the qualities for which we're universally known, "courage and understated determination". He quoted his grandmother, the Queen, as saying that grief is the price of love. It was pure class.’ 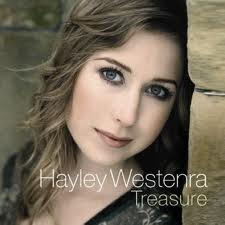 ‘Hayley Westenra (pictured) stopped the day. She stopped the birds in the trees, did Hayley. The sun stopped moving across the sky and listened in wonder. The timing in her performance of Amazing Grace was extraordinary. You found yourself not breathing.’ (Listen to it here)

2. The Crusaders vs Sharks Game at Twickenham

We turned up in our red and black face paint in the pattern of Darth Maul from Star Wars and ended up on Television New Zealand News. See all of us at 51-54 seconds and my interview at 1.11-1.14. Quite bizarre! 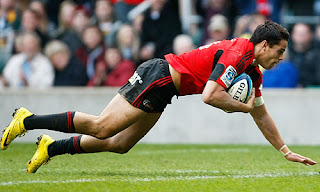 Watch the highlights of an amazing game of running rugby featuring 22 internationals on you tube and if you are British be very afraid!

The game featured again an emotional NZ anthem by Geoff Sewell along with Pokarekare Ana from Hayley. And the one minutes silence for the 182 earthquake victims with 35,000 people in the huge Twickenham stadium was quite phenomenal.

I have always been proud of my home team which has won the super rugby crown seven times in fifteen attempts. But I felt extra proud that day to be a Kiwi and a Cantabrian. And we have soaked up the praise from the British commentators again and again ever since.

Some selections below – but if you have time and are feeling indulgent (or are a Kiwi) then read the articles in full and enjoy:

‘Adversity brings out the best in some people. It will take more than a decent 80 minutes of rugby to rebuild the ruins of central Christchurch but a spectacular win for the Crusaders achieved some important goals in the London sunshine… Last but by no means least this was the day when several fond, smug northern hemisphere assumptions were systematically torn apart. Yes, the weather was glorious and conditions perfect for running rugby. Yes, there were 22 internationals on the field at kick-off. Yes, a few tackles went astray. But long before the Crusaders wing Sean Maitland scored the decisive ninth try of a pulsating match it was equally clear that those who reckon the Super 15 has nothing to teach its European counterparts inhabit the myopic land of cloudy cuckoos.’ (The Guardian)

‘They were in London as a direct consequence of the earthquake that wreaked such destruction on their home town of Christchurch, yet the mood of their rugby was anything but careworn, still less doom-laden. If Daniel Carter and Sonny Bill Williams were jaw-droppingly good in midfield, there were contributions from less celebrated individuals, such as the wing Sean Maitland and the flanker Matt Todd, that might have made every international coach sit up and take notice. How can a team lose a genuinely great loose forward like Richie McCaw to injury, and then conjure up someone as good as Todd out of thin air to take his place?’ (The Independent)

‘Not everyone can offload like Sonny Bill Williams or Dan Carter. But what the home unions and France do have is loads of athletic young men who, with a bit of encouragement, could play like the Whitelock brothers, Owen Franks, Matt Todd and Zac Guildford, all of whom displayed more wit and pace than many of their better-known northern brothers would have done in similar circumstances. All of them did the basics outstandingly well but there was more to it than that. It was not the froth – the nine tries and the aggregate of 72 points in a 44-28 win for the Crusaders – which made such an impression. Above all, it was the blissful confirmation that the best rugby teams are about brain as much as brawn. What price the mere gym monkey against someone like Sonny Bill: part streetwise octopus, part street juggler, part juggernaut?’ (Guardian Blog)
Posted by Peter Saunders at 12:14