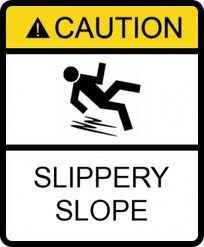 I’m grateful to Wesley Smith for drawing my attention to this article just published in the Canadian Journal ‘Current Oncology’.

Palliative Medicine Specialist Dr José Pereira, in a detailed paper, ‘Legalizing euthanasia or assisted suicide: the illusion of safeguards and controls, outlines just how poor guidelines are at protecting the vulnerable.

There is thus a logical slippery slope operating, in that if you accept assisted suicide or euthanasia is applicable for some under strict criteria, then it must follow logically that it will also be applicable for others outside these bounds.

Activists pushing for legalisation are obviously aware of this.

Pereira looks at the slippery slope in practice in those jurisdictions that have legalised assited suicide and euthanasia and shows that the safeguards are illusory.

I’d recommend reading his whole article – but I have reproduced the abstract and summary below to give you a flavour of the content.

‘Euthanasia or assisted suicide—and sometimes both—have been legalized in a small number of countries and states. In all jurisdictions, laws and safeguards were put in place to prevent abuse and misuse of these practices. Prevention measures have included, among others, explicit consent by the person requesting euthanasia, mandatory reporting of all cases, administration only by physicians (with the exception of Switzerland), and consultation by a second physician.

The present paper provides evidence that these laws and safeguards are regularly ignored and transgressed in all the jurisdictions and that transgressions are not prosecuted. For example, about 900 people annually are administered lethal substances without having given explicit consent, and in one jurisdiction, almost 50% of cases of euthanasia are not reported. Increased tolerance of transgressions in societies with such laws represents a social “slippery slope,” as do changes to the laws and criteria that followed legalization.

Although the initial intent was to limit euthanasia and assisted suicide to a last resort option for a very small number of terminally ill people, some jurisdictions now extend the practice to newborns, children, and people with dementia. A terminal illness is no longer a prerequisite. In the Netherlands, euthanasia for anyone over the age of 70 who is “tired of living” is now being considered. Legalizing euthanasia and assisted suicide therefore places many people at risk, affects the values of society over time, and does not provide controls and safeguards.'

Denying euthanasia or pas in the Netherlands is now considered a form of discrimination against people with chronic illness, whether the illness be physical or psychological, because those people will be forced to “suffer” longer than those who are terminally ill.

Non-voluntary euthanasia is now being justified by appealing to the social duty of citizens and the ethical pillar of beneficence. In the Netherlands, euthanasia has moved from being a measure of last resort to being one of early intervention. Belgium has followed suit 37, and troubling evidence is emerging from Oregon specifically with respect to the protection of people with depression and the objectivity of the process.

The United Nations has found that the euthanasia law in the Netherlands is in violation of its Universal Declaration of Human Rights because of the risk it poses to the rights of safety and integrity for every person’s life. The UN has also expressed concern that the system may fail to detect and to prevent situations in which people could be subjected to undue pressure to access or to provide euthanasia and could circumvent the safeguards that are in place.

Autonomy and choice are important values in any society, but they are not without limits. Our democratic societies have many laws that limit individual autonomy and choice so as to protect the larger community.

These include, among many others, limits on excessive driving speeds and the obligation to contribute by way of personal and corporate income taxes. Why then should different standards on autonomy and choice apply in the case of euthanasia and pas?

Legislators in several countries and jurisdictions have, in just the last year, voted against legalizing euthanasia and pas in part because of the concerns and evidence described in this paper. Those jurisdictions include France, Scotland, England, South Australia, and New Hampshire. They have opted to improve palliative care services and to educate health professionals and the public.'
Posted by Peter Saunders at 14:50