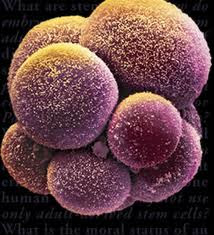 Stem cell scientists are kicking up an enormous fuss over a ruling expected very soon from the European Court of Justice about patents for embryonic stem cells.

They are up to their usual tricks hyping up the therapeutic potential of these cells for a variety of degenerative diseases and the BBC is obliging in its usual manner by transcribing their press releases for distribution around the world without any critical analysis of the underlying issues.

In a letter to Nature, about 30 scientists have expressed 'profound concern' about moves at the Court of Justice to make it unlawful to allow patents where research involves destroying embryos. The judges are not bound to follow the advice but frequently do so.

In their letter the scientists argue that the biotechnology industry would have no incentive to invest in this area unless their innovations could be protected with patents.

One of the co-signatories is Professor Austin Smith from the Wellcome Trust Centre for Stem Cell Research in Cambridge has said, 'It would be devastating if the court was to follow this advice. It would put at threat the future of biomedical research in Europe and some projects here could collapse.'

This story is primarily not about science. It's about money. If the judgement goes the way it looks headed the biotechnology companies who provide these scientists' research grants may well look to invest their money elsewhere.

Smith goes on, 'It would also send the message that scientists are engaged in immoral activity so this is very negative for our community and it would erode public confidence in what we do.'

Quite! If the news got out that thousands of human embryos are being cannibalised for no good purpose other than funding scientific curiosity and raising biotechnology company share values it might indeed influence public opinion.

Would that be a bad thing given the way that UK scientists have overhyped embryonic stem cells to a gullible public and parliament for over ten years with very little to show for it in terms of any promise of therapeutic advance?

I have blogged about this issue many times before and won't repeat the arguments here but refer readers to my past blogs on spinal cord injury, cord blood, three parent embryos and adult stem cells where the arguments are outlined in some detail.

If you follow the links in these you will be able to access information about the science in this whole arena which you may never learn from the BBC or the press releases of scientists whose salaries are paid by the biotechnology industry.

The case before the court was originally begun by Greenpeace in Germany.

An adviser to Greenpeace, Dr Christoph Then, said the organisation was not opposed to all stem cell research: 'We do not think the opinion of the Advocate General is so clear. Our original purpose was to clarify the patent law, especially around the industrial use of embryos.'

It is the commercial exploitation of human life that bothers them. It bothers me too. And I think it would bother thousands more people too if they were able to learn the truth.

A ruling from the European Court of Justice is expected within a couple of months. It will not stop embryo research but it could potentially take the wind out of the European biotechnology industry's sails by making it no longer economically viable to fund embryonic stem cell research.

That would mean less money wasted on blind alley research by people with financial and ideological vested interests and more being invested where it is really needed for the good of all - in adult stem cell technology.

There is some helpful background on the ruling on the CORE website, including a description of how advocates for embryonic stem cell research are attempting to redefine the human embryo in an attempt to push this through.

Here, from CORE, is a summary of the legal precedent that has led to the case:

'It should be noted that this prohibition is not a novelty. It is clearly stated in Article 6 of Biotech Patents Directive (98/44) which binds all EU members since 1998. The first paragraph of this directive describes inventions as unpatentable where their commercial exploitation would be contrary to ordre public or morality. It goes on to specify in the next paragraph that the prohibitions include particular processes for cloning human beings or for modifying the germline genetic identity of human beings, as well as the use of human embryos for industrial or commercial purposes. None of these practices are patentable.'

We await the final ruling with interest. Expect much more shroud-waving, squealing, empty promises, half-truths and strident propaganda from scientists until then.
Posted by Peter Saunders at 03:52