By focussing exclusively on HIV/AIDS, malaria and TB, Western governments and NGOs have neglected other easily treatable and curable diseases 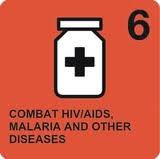 Micah Challenge is a global coalition of Christians holding governments to account for their promise to halve extreme poverty by 2015.

It is establishing a global movement to encourage deeper Christian commitment to the poor, and to speak out to leaders to act with justice and its specific focus is the Millennium Development Goals.

The Millennium Development Goals (MDGs) are eight international development goals that all 192 United Nations member states and at least 23 international organizations have agreed to achieve by the year 2015.

They include eradicating extreme poverty, reducing child mortality rates, fighting disease epidemics such as AIDS, and developing a global partnership for development.

The aim of the MDGs is to encourage development by improving social and economic conditions in the world's poorest countries.

The eight MDGs were developed out of the eight chapters of the United Nations Millennium Declaration, signed in September 2000. There are eight goals with 21 targets, and a series of measurable indicators for each target.

Goal 6 is to ‘Combat HIV/AIDS, malaria, and other diseases’ and its three associated targets are as follows:

There are five measurable indicators for target 6C but every single one of them relates to tuberculosis and malaria and none to ‘other diseases’.

So in other words, whilst MDG 6 aims to ‘combat HIV/AIDS, malaria, and other diseases’ the exclusive focus of its associated ‘targets’ and ‘measurable indicators’ is actually HIV/AIDS, malaria and TB. To emphasise the point the United Nations webpage on the MDGs highlights just these three diseases.

The Global Fund to Fight AIDS, Tuberculosis and Malaria is an international financing institution that invests the world’s money to save lives. To date, it has committed US$19.3 billion in 144 countries to support large-scale prevention, treatment and care programs against the three diseases.

This is perhaps not at all surprising given the support of wealthy donors and celebrities like Bill and Melinda Gates, Warren Buffet and Carla Bruni. But at the same time virtually no progress has been made on ‘other diseases’. If you don’t identify your target there is little chance of hitting it.

So what are these other diseases? And who is championing their cause?

You, like me, may have missed a series of articles in the Guardian highlighting research that is answering just this question, and giving a platform to the British doctor who has been almost a lone voice in trying to attract the world’s attention to this issue.

In 2005 David Molyneux of the Liverpool School of Tropical Medicine said ‘We urge policy makers and health economists to recognise that although HIV, TB and malaria are the most serious problems facing health planners, other diseases exist that can be addressed at realistic cost with effective interventions. Controlling Africa's neglected diseases is one of the more convincing ways to make poverty history.’

As it seems that no one has listened he has now said it again.

Molyneux and his fellow researchers are not saying that we should turn our back on HIV/AIDS, TB and Malaria. Far from it! What he is saying is that they must not be our exclusive focus:

‘We urge policy makers and health economists to recognise that although HIV, TB and malaria are the most serious problems facing health planners, other diseases exist that can be addressed at realistic cost with effective interventions. Controlling Africa's neglected diseases is one of the more convincing ways to make poverty history.’

Reaching everyone in Africa who needed treating would cost $200m a year, a mere fraction of the $15bn a year being spent on malaria, HIV and TB.

However, the plight of these people is being neglected because resources are being monopolised in developing countries by HIV, malaria and TB – even though these diseases infect a much smaller fraction of their populations.

These ‘other diseases’ are being missed because of distorted health policy goals.

‘This is not the fault of pharmaceutical companies,’ says Molyneux. ‘They have made available billions of doses of key drugs. Our problem is that we are not providing the impetus or the means for getting these drugs to disease sufferers. People at policy level think that only malaria, TB and HIV exist in the third world. This is not true. Neglected tropical diseases as a whole – like sleeping sickness or bilharzia – cause more of a burden than these big-name diseases but are being ignored.’

Most major pharmaceutical companies have pledged to provide, at no cost, billions of doses of the drugs needed to combat these diseases. But many G8 governments have failed to provide the means or impetus to get those drugs to the people who need them, a failure which Molyneux says is a major one.

‘If we can't deliver free drugs to poor people, I don't think there is much else we can do in international health’, he said.

Matthew’s Gospel tells (4:23) us that ‘Jesus went throughout Galilee, teaching in their synagogues, proclaiming the good news of the kingdom, and healing every disease and sickness among the people.’

Surely if Jesus himself didn’t focus on just some diseases, but dealt with all, then as his people we must do the same.

I pray that it will not be said of us as a generation of Christian doctors, that whilst making an impact on HIV/AIDS, TB and Malaria we turned a blind eye to ‘other diseases’ like schistosomiasis, river blindness, ascariasis, elephantiasis and trachoma.

The neglected diseases (with numbers affected in sub-Saharan Africa)