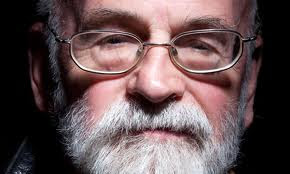 Today I went by invitation to the launch of Lord Falconer’s Commission on ‘Assisted Dying’ at the London headquarters of think-tank Demos.

He confirmed that the commission has been set up with funding provided by Bernard Lewis and celebrity novelist Terry Pratchett (pictured), a Patron of Dignity in Dying and advocate of legalizing assisted suicide for people with dementia. He also confirmed that Dignity in Dying itself (formerly the Voluntary Euthanasia Society) had made the arrangements for its formation.

He insisted however that his inquiry into assisted dying in the UK would be ‘an objective, dispassionate and authoritative analysis of the issues’.

The aims of the commission are to consider ‘what system, if any, should exist to allow people to be helped to die and whether changes in the law should be introduced’. He confirmed at the meeting, in answer to a question, that the commission would deal only with assisted suicide and not with euthanasia.

In an attempt to answer critics (including me) who have raised concerns over the commission's transparency, independence and objectivity, he said: ‘We will evaluate all the evidence we hear on a fair basis, judge us at the end by the quality of our report.’

Today we learnt the names of all twelve members of the commission. It was no surprise to learn that the majority (nine) are known already by those who work in this field to support a change in the law to allow assisted suicide. Most have actively worked towards this end in the past. None of the remaining three are known to oppose it.

I asked the Demos Director about how the members of the commission were selected and she confirmed that they had been effectively handpicked by Lord Falconer himself. She didn't go as far as saying they had been interviewed by DID CEO Sarah Wootton and Terry Pratchett himself (and I didn't ask), but that might be a good line of questioning for journalists.

Falconer has included people who are prominent in their respective professions and have impressive sounding titles that bring a degree of gravitas to the proceedings but he has kept very quiet about their personal views. This will effectively fool most casual observers and media people not that familiar with the broader cast in this whole debate.

He has, for the same reason, avoided using any of DID's official patrons, seemingly in order to create the impression that this is a group of 'independent' people not linked with DID (when in fact most of them are), or who at very least, in the main, share Falconer's own views.

So who are the twelve members of this grand jury?

Lord Falconer himself, who will chair the commission, has campaigned long and hard on this issue and attempted to legalise assisted suicide via an amendment to the Coroners and Justice Bill in 2009.

Baroness Elaine Murphy of Aldgate and Baroness Young of Old Scone share Falconer’s views – Young supporting Falconer’s amendment on 7 July 2009 and Murphy voting for Lord Joffe’s Assisted Dying Bill on 12 May 2006. Penny Mordaunt MP has not had an opportunity to vote on the issue but recently made her own support for legalisation very clear.

While all the major disability rights organisations in the UK (RADAR, UKDPC, NCIL, SCOPE, Not Dead Yet) oppose a change in the law Stephen Duckworth, Chief Executive of Disability Matters Limited, is one of those rare disabled people actually to back legalisation. 'Disability Matters' sounds grandiose but it is in reality just a private business - and judging by the current accessibility of its website, may not be doing that much at present. Duckworth happens to be disabled (hence his usefulness to Falconer) but he seems not to represent anyone but himself. Hardly surprising then that he is included on this panel.

Earlier this year I was involved in a two hour dialogue in Oxford (over dinner) with Lord Ian Blair of Boughton, former Commissioner of the Metropolitan Police, and I can assure you that he too firmly supports a change in the law.

Sir Graeme Catto, former President of the General Medical Council, recently spoke in support of the new organisation seeking to promote the legalisation of ‘assisted dying’, Health Professionals for Change.

So who does that leave? Just three whose views we (or at least I) do not already know but may be able to guess: Dame Denise Platt, Member of the Committee on Standards in Public Life; Celia Grandison-Markey, Management Consultant for Health and Social Care in the public sector; and the Revd Canon Dr James Woodward, Anglican Priest and Canon of St George’s Chapel, Windsor.

Any information of any of these would incidentally be most welcome.

So is this an independent committee? I think not! In fact I am astounded that Demos, which is to act as secretariat, providing administrative and research support, has agreed to work with such an unbalanced group.

But I suspect that like most of the British Public, Demos was simply not aware of where these illustrious people’s personal convictions lay.

But it is a trifle disingenuous of him to pretend that a group with such clearly settled prior convictions, might bring any impartiality or objectivity to bear on these important issues.
Posted by Peter Saunders at 16:02