The Inglis judgment should send a strong signal that it is not acceptable to take another person’s life, even in desperation. 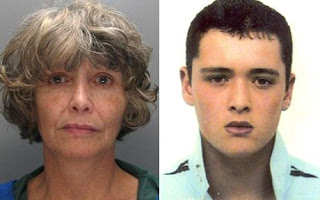 A woman from East London who was found guilty of murder after giving her brain-damaged son a lethal heroin injection to end his ‘living hell’ has lost an appeal against conviction.

Frances Inglis, 58, of Dagenham, was jailed for life with a minimum term of nine years at the Old Bailey in January.

Three judges at the Court of Appeal in London have rejected her conviction challenge, but reduced the minimum period she must serve before becoming eligible to apply for parole to five years.

Lord Judge said: ‘There is no doubt at all that the appellant was subjected to great stress and anguish, but dealing with it briefly and starkly, there was, as our analysis of the evidence underlines, not a scintilla of evidence that when the appellant injected the fatal dose of heroin into her son she had lost her self-control.’

Examining the concept of mercy killing in the ruling, he said: ‘We must underline that the law of murder does not distinguish between murder committed for malevolent reasons and murder motivated by familial love. Subject to well-established partial defences, like provocation or diminished responsibility, mercy killing is murder.’

Tom Inglis (22) suffered severe head injuries when he fell out of a moving ambulance in July 2007. His mother, who worked as a carer for disabled children, first tried to end his life two months after the accident when he was being treated at Queens Hospital in Romford, Essex. His heart stopped for six minutes but he was revived.

Prior to this incident Tom’s condition had been slowly improving to the extent that he was able to open his eyes and move his limbs. But according to Prosecutor Miranda Moore QC, his mother had come to the view that he would not get better and she wanted him to die.

The mother-of-three was charged with attempted murder before successfully trying again in November 2008 after barricading herself in her son’s room at the Gardens nursing home in Sawbridgeworth, Hertfordshire, and supergluing the door. Jurors returned majority verdicts of 10-2 and the trial judge told them that they could not have had ‘a more difficult case’.

At the recent appeal hearing, her QC Alan Newman told the judges that she feared her son would die in agony and gave him the injection to end his life ‘peacefully and painlessly’. Inglis believed he was in ‘constant pain’.

It was argued on her behalf that the trial judge should have left the issue of provocation to the jury. Referring to the fact that Inglis had not lost her self-control, Lord Judge said all the evidence was to the contrary. He said that far from lacking or losing self-control - an ‘essential’ ingredient for the defence of provocation - she was ‘completely in control of herself’. The judges ruled that her appeal against conviction was ‘not arguable’.

Lord Judge, in his summing up, gave a strong defence of the dignity and worth of all human life and made it crystal clear that it is not acceptable to make judgments about the worth or value of the life of another person and act on it in this way. He said:

‘The fact is that he was alive, a person in being. However brief the time left for him, that life could not lawfully be extinguished.

Similarly, however disabled Thomas might have been, a disabled life, even a life lived at the extremes of disability, is not one jot less precious than the life of an able-bodied person.

Thomas's condition made him especially vulnerable, and for that among other reasons, whether or not he might have died within a few months anyway, his life was protected by the law, and no one, not even his mother, could lawfully step in and bring it to a premature conclusion.’

The fundamental purpose of the law is to protect vulnerable people and this judgment is a very important restatement of the law.

The sentence of five years is actually very low for a murder charge reflecting the fact that the judges have clearly chosen to temper justice with mercy.

However it is most significant that whilst in possession of all the relevant material, they still considered a substantial period in custody as appropriate to the facts in this case.

The law prohibiting all intentional killing, including that for alleged compassionate motives, is clear and right. It provides a strong disincentive to abuse and exploitation whilst allowing judges discretion in sentencing to reflect the circumstances of the individual case. Disabled people will sleep more easily in their beds in the light of this judgment knowing that the law still offers them some protection.

This judgment should send a strong signal that it is not acceptable to take another person’s life, even in desperation.
Posted by Peter Saunders at 07:27