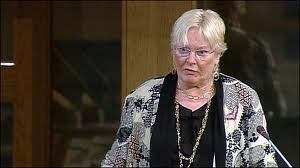 I have previously blogged about Margo MacDonald's End of Life Assistance (Scotland) Bill which seeks to legalise both assisted suicide and voluntary euthanasia and Scotland. I argued that Margo Macdonald has been seriously misleading both the Scottish people and Parliament itself about its likely effects.

The Committee scrutinizing the bill has now published its Stage 1 report and has emphatically recommended the Bill should be rejected.

MSPs will debate the bill next week at 2.55pm on Thursday 25 November with a vote late that evening. If voted out at that stage the bill will fall.

The British Medical Association Scotland was among those who made the plea after a Holyrood committee said the case has not been made for changing the law to allow the practice.

Margo Macdonald MSP, who suffers from Parkinson’s disease, originally introduced the bill with the intention of legalizing so-called ‘assisted dying’ in Scotland but had faced widespread criticism over the scope, clarity and lack of safeguards in the proposed legislation.

The rejection of the bill by the committee, which was established in February this year to consider the general principles of the Bill and report on them to the Scottish Parliament, is the latest step in a long-running saga.

On 3 March 2010, the Committee launched a public call for evidence, inviting individuals and organisations to make written submissions with their views on the Bill. The consultation closed on 12 May 2010.

Of the 601 people and organisations who gave written evidence to the consultation on the Bill, only 6.5 per cent (39) were in favour of it. Scottish Parliament then called for and received Oral evidence.

The full report of the committee, which reviews and considers all this evidence, both written and oral, has now come to the conclusion that the bill should not proceed.

Care Not Killing, http://www.carenotkilling.org.uk/ an alliance of over 40 organisations promoting palliative care and opposing euthanasia, of which CMF is a core member, which made a written submission to the consultation along with giving oral evidence, has also published a detailed briefing Paper on the Bill. It has welcomed the conclusions of the committee.

CNK outlines why the bill should be rejected as follows:

The scope of the Bill is incredibly broad. It would offer assisted suicide to people who are to some degree dependent on others and would include those with life threatening and non life-threatening disabilities, and those with relatively common conditions such as, for example, insulin-dependent diabetes, heart or lung disease.
Tens of thousands of seriously ill and disabled people throughout Scotland would fall within its remit.

The drafting of the Bill is vague and full of euphemisms and ambiguities. Among others, there is no definition of what it is to find life 'intolerable' and the methods by which life would be legally terminated are not identified.

The bill is not clear on what means can be used to end a person's life. One might assume that it is envisages lethal drugs but this is not specified and therefore the 'means of administration' might conceivably include gas (carbon monoxide or helium), hanging, a bullet or a push off a cliff.

Safeguards are seriously defective. Among others, there is real doubt that the suggested medical assessments would be sufficient to discern that the patient is not under external pressure to request assisted suicide.

The Bill contains no specified procedures by which doctors would report their involvement with an assisted suicide. This makes meaningful audit of how the law was working highly problematic.

It places responsibility for providing “end of life assistance” on the shoulders of Scottish doctors, for whom it contains no 'conscience clause' and the majority of whom would not be prepared to participate in implementing the proposals of the Bill.

The Bill is intended to 'enable a person to die with dignity and a minimum of distress'. This is already provided through good health care and particularly palliative medicine.

The vast majority of medical practitioners and all the Royal Colleges of Medicine do not support assisted suicide.

The Scottish Parliament has already had two opportunities to discuss assisted suicide. On both occasions the legalization of assisted suicide was convincingly rejected.
For society to accept assisted suicide or euthanasia means it agrees that some lives no longer have any meaning, value or worth.

Evidence from the Netherlands and the US state of Oregon – where assisted suicide is currently legal - shows that it is impossible to prevent abuses from occurring.

Well over 20,000 people have signed up to the Care Not Killing postcard campaign opposing the Bill. This is by far and away the biggest campaign response since the Scottish Parliament was established.

The Scottish Parliament would be wise now to follow their own committee’s recommendations and bury this bill for good next Thursday.
Posted by Peter Saunders at 01:14