New report claims that junior doctors' training 'puts patients at risk' but will the government be prepared to pay for the real solution required? 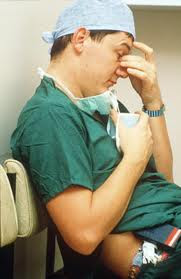 A new report, Foundation for Excellence, this week has claimed that patients are being put at ‘unnecessary risk’ because inexperienced junior doctors are being ‘thrown in at the deep end’.

The 128-page report, led by Professor John Collins of Oxford University (interestingly one of my old surgical bosses!) for Medical Education England, analysed the two-year foundation programme for trainees, which they now join after graduating from medical school.

The report claims that trainee doctors in their first two working years are often being asked to perform ‘beyond their level of competence and without adequate supervision’.

In the wake of the report’s publication Health Secretary Andrew Lansley has asked Medical Education England ‘to work with the profession, the service and medical Royal Colleges to take forward the (33) recommendations as swiftly as possible’.

I was particularly interested in the comments of John Black, president of the Royal College of Surgeons, who said that while any doctor had to expect ‘difficult situations’, this should be mitigated by having a ‘proper team structure in place’.

He commented: ‘Unfortunately these team structures have been eroded to the point of vanishing by the introduction of the ill-conceived EU regulation which restrict doctors’ working hours, leaving junior doctors isolated and without adequate supervision.’

I did my first two years as a junior doctor in a district general hospital in New Zealand in the early 1980s. We generally worked a ‘one in four’ call (averaging 72 hours on duty per week) with three of us (all in our first two years post qualification) covering a 500 bed hospital, including acute admissions and casualty, which served a population of about 100,000 people.

Consultants and registrars were not in the hospital after hours but could be called in from home.

On my very first weekend on call we dealt with a major road accident with four young male casualties. Fortunately the two of us (juniors) called first to the scene had done an attachment in our final student (trainee intern) year in ‘anaesthetics and intensive care’ and ‘coronary care’ respectively which was most fortunate given that the first patient had a cardiac arrest in the resuscitation room shortly after arrival. We were able to intubate, rehydrate and cardiovert him before the more senior staff arrived although he later died from what were very serious generalised injuries.

The second patient needed an emergency tracheostomy in the A&E department for an obstructed airway (thankfully we did not have to do that!) and the third needed to be flown out to a major centre for emergency neurosurgery. The fourth was admitted with a head injury that did not prove serious. All three did well.

It was a baptism of fire but we survived and I went on to specialise in general surgery. During my junior years I was once working in a hospital where we did 80 hour shifts every fourth weekend starting at 0800 on Friday and finishing at 1700 (or later) the following Monday. You usually got some sleep when things quietened down in the small hours but it was not guaranteed and I remember one Monday afternoon, after a busy weekend on call, being unable even to insert a cannula out of sheer exhaustion.

What encouraged the hospital to continue with these ridiculous hours was the fact that it was far cheaper to employ juniors on long shifts because we only were paid only 30% of our usual hourly wage for each hour worked over 40 hours per week. It wasn’t until junior doctors called a national strike in the 1980s for the introduction of penal rates (ie at least our normal hourly wage for each hour’s overtime) that the practice stopped.

Working hours for most juniors dropped overnight and hundreds of overseas doctors were drafted in to fill the gaps in the shifts (which brought its own problems as many were not adequately trained).

The European Working Time directive has brought similar changes in the UK.

I don’t miss working those hours but one thing I think today’s juniors do miss out on is the teamwork and continuity of care that was our general experience. We were almost always rostered on with the same team – usually a houseman (foundation year junior), registrar (specialist trainee) and consultant.

The advantage of this was that you grew together as a team and all looked after each other’s interests. Moreover it was I believe better for training - an apprentice model of learning really did operate. In addition we didn’t have to deal with the perils of patient handover at the end of a shift. We looked after the patients we admitted until discharge and only passed them over to other teams if they were already better known to another consultant. We also didn’t have to face today’s dreaded ‘week of nights’ shifts.

Whilst today’s juniors do not have to face attempting to function whilst exhausted I feel they do miss out on the strength of the team relationships we enjoyed and the benefits to learning from following patients all the way through the course of their hospital stay.

And whilst at times the supervision was less than adequate (and like today at times unacceptably so) it wasn’t all bad and in some ways better than today’s situation.

Judging by Professor Collins’ report there is still a lot of improvement needed.

The challenge will be to maximise patient safety, good supervision, excellent training, team-working and continuity of care. This will require financial investment. And, like for us, I suspect that is the real issue.
Posted by Peter Saunders at 10:20