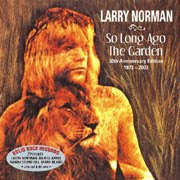 Just found Larry Norman's Nightmare on You Tube - astonishingly prophetic from the 1970s.

I've pasted the lyrics here for you. Enjoy!

"with the continents adrift and the sun about to shift
will the ice caps drown us all or will we burn
we've polluted what we own will we reap what we have sown?
are we headed for the end or can we turn?
we've paved the forest killed the streams
burned the bridges to our dreams
the earth is bursting at the seams
and in pain of childbirth screams
as it gives life to what seems
to either be an age that gleams
or simply lays there dying
if this goes on will life survive how can it
out of the grave oh who will save our planet?"

i said i'm pleased to meet you i always thought you were a scream
he said "had you ever thought of having helen keller in your dreams?"
i said errol flynn dropped by but he tried to steal my girl
then she ran off with ronald colman said something about a new world
now i'm stuck with my own cooking hell i'm lonely can't you see
well he grabbed my leg he said exactly eighty nine words to me
count 'em

"let the proud but dying nation kiss the last generation
it's the year of the pill, age of the gland
we have landed on the moon but we'll clutter that up soon
our sense of freedom's gotten out of hand
we kill our children swap our wives
we've learned to greet a man with knives
we swallow pills in fours and fives
our cities look like crumbling hives
man does not live he just survives
we sleep till he arrives
love is a corpse we sit and watch it harden
we left it oh so long ago the garden"

the strings snapped briskly then went slack the marionette lay dead
while hoover played with the motorcade the body slumped and bled
the man who held the camera disappeared into the crowd
i said the hope of youth, fictitious truth, lays covered in a shroud
then up walked elmo lincoln and he said i beg your pardon
but we left it oh so long ago, the garden
Posted by Peter Saunders at 15:48