Is this the best cricket catch ever? 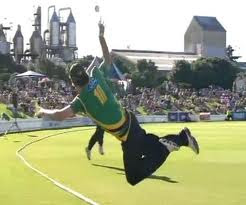 New Zealand teenager Bevan Small, whose wonder catch has catapulted him to global celebrity, has played down the feat saying his focus is on making the first eleven of his provincial cricket team.

The video clip of Small's acrobatic catch for Central Stags against the Northern Knights in New Zealand’s 2020 competition has been replayed on television and websites around the world.

In England, The Guardian newspaper said the catch was ‘perhaps the greatest in the history of cricket’ while the US-based Huffington Post said it could ‘be the most amazing (and for many, only) cricket catch you'll ever see’.

What do you think?
Posted by Peter Saunders at 14:42