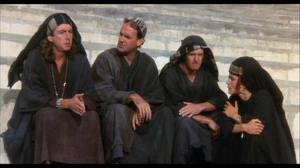 In Monty Python’s Life of Brian the members of ‘The People's Front of Judea’ are sitting in the amphitheatre (see video).

Stan (far left) has just announced that he wants to be a woman and is explaining why.

The dialogue runs as follows:

Stan is seeking a right, having babies, which he cannot exercise, because he is not actually a woman. But he fails to recognise this reality and instead claims that he is being oppressed.

At the Australian Open, there was talk of a coordinated protest against former champion Margaret Court’s opposition to same sex marriage (she is now an evangelical Christian pastor), and a Facebook campaign to wave rainbow flags on court.

But in the end it was just the British player Laura Robson who showed her colours by wearing a rainbow coloured headband.

Robson seemed slightly befuddled by the ensuing international media coverage she received, but concluded: ‘I wore it because I believe in equal rights for everyone.’

Robson’s unspoken presupposition, which is shared by many, is that in a free society, equality demands that every activity should be open to everyone.

And yet Robson was herself participating in a tournament, the Australian open tennis tournament, that was clearly not open to everyone, and for which only very few people were able to qualify.

Many activities other than tennis tournaments are open to some people but not to others: attending university, visiting a foreign country, applying for a job, casting a vote, entering a private club, playing a round of golf or visiting Buckingham Palace.

Similarly virtually all rights are balanced with restrictions – not everyone is allowed to drink alcohol, drive a car, buy property, own a firearm or participate in a 100m women’s Olympic event. You must fulfil certain requirements.

We all accept these restrictions largely without question. Not everyone has a right to participate in these activities.

This raises the question as to why some gay rights activists, politicians and members of the public are seemingly unable to understand or accept that marriage, as a special kind of relationship, is available for some people but not for others.

Introducing ‘same-sex marriage’ would confer almost no additional legal rights: same-sex couples have these already thanks to the Civil Partnership Act 2004. The President of the Family Division has even described civil partnerships as conferring ‘the benefits of marriage in all but name’.

But the leaders of Britain's major political parties, including prime minister David Cameron, seem not to grasp this and are wanting to lump civil partnerships and marriages together.

When asked this week by Archbishop Peter Smith what additional rights marriage would give same sex couples that they did not have already under the Civil Partnership Act, Home Secretary Theresa May was not surprisingly unable to give an answer.

And yet during their meeting Mrs May said that the Government intended to introduce same-sex marriage regardless and that the consultation was merely to help with the ‘nuts and bolts’ of the legislation.

But marriage – like any of the activities listed above – has never been open to everyone. In order to marry one must be legally ‘free to marry’, that is, aged 16 or over and single, widowed or divorced and there are also restrictions on who, you can marry. You cannot, for example, marry certain close relatives, marry more than one person or marry someone of the same sex.

This is because marriage is a human institution bound by legal contract – with a specific legal definition, ‘the voluntary union of one man and one woman to the exclusion of all others for life’ (Hyde vs Hyde;1866).

Calling something 'marriage' that is not marriage, in order to appease a vocal minority, does not make any sense.

It is not up to governments to redefine marriage – but simply to recognise it for what it is, and to accept that it is not open to everybody.