How the 'liberal' thought police shut down public discussion about homosexuality 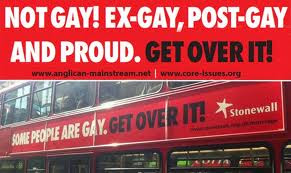 Max Pemberton is a doctor who writes for the Daily Telegraph.

I have already commented on his latest offering, ‘There’s no such thing as a “gay cure”’, a shoddy piece of polemic, replete with unsupported assertions and misleading statements, which does him no credit.

But I also said then that I would return to his claim that Anglican Mainstream’s recent bus adverts were dangerous and motivated by prejudice.

I am not here defending Anglican Mainstream for their provocative plan to run ads on the side of some London buses reading ‘Not gay! Post-gay, ex-gay and proud. Get over it!’ which conjures up images for me of poking a short stick into a hornets’ nest. 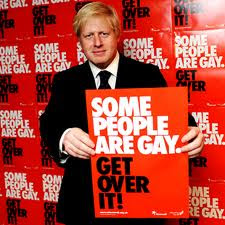 Nor shall I comment on London mayor Boris Johnson’s move to block the adverts after they had been signed off, approved and paid for, or speculate about the ensuing court case, tempting though it is given his apparent enthusiasm for related causes!

But I do want to pick up on Max Pemberton’s reasons for saying why he thought the adverts should be banned in the first place, as he illustrates well an ever more common ploy of sections of the gay rights lobby that needs to be challenged and exposed.

Let’s allow Pemberton to explain the reasons he backs this censorship in his own words:

‘Young gay men and women are at a statistically higher risk of suicide and self-harming behaviours precisely because of alienating and prejudiced attitudes in society. These bus slogans would have perpetuated this and helped create a negative, hostile environment for often confused and vulnerable individuals. While I might not like it, I accept that it’s people’s right to express homophobic – or indeed racist or sexist – views, but in some circumstances society has to step in and place limitations on where you can say it so that it does not create an intolerable and damaging environment for those being attacked.’

This extraordinary paragraph deserves deeper analysis as it propagates a number of unproven assumptions that are regularly trotted out by the gay rights movement as if they were self-evident truths.

Pemberton’s first argument is that the bus campaign had to be stopped in order to save the lives of vulnerable young gay people. If the ads ran, he insinuates, some gay people would have killed themselves.

He offers no evidence whatsoever to back this up but simply asserts it as if to do so is to establish his point beyond any reasonable doubt - an extraordinary example of special pleading.

It is of course true that the gay community suffers from ‘a statistically higher risk of suicide and self-harming behaviours’ than the average, but Pemberton’s conclusion that this is ‘precisely because of alienating and prejudiced attitudes in society’ is hugely contentious.

However, so ingrained has this view become that many now accept without question the ‘fact’ that gay people take their own lives primarily because they are an oppressed and persecuted minority. The reality is far more complex than that.

The argument that gay people are downtrodden vulnerable victims may have worked in the 1960s but it is now wearing a little thin at a time when gay role models and celebrities are worshipped by the media and liberal establishment, when gay rights post Equality Act appear to trump all other rights in the courts, when gay rights activists, and those who support their worldview, are disproportionately represented in virtually every corridor of power and influence including even the Church of England and indeed when the Prime Minister himself champions gay rights and marginalises those who stand in the way.

But the argument that gay people are persecuted is in reality not actually an argument at all. It is rather a technique aimed at marginalising and silencing reasonable opposition.

Which brings me to Pemberton’s second point – that running the bus ads would have ‘helped create a negative, hostile environment for often confused and vulnerable individuals’ and led to gay people ‘being attacked’.

There are of course sadly still those who act violently toward gay people. This is completely unacceptable and perpetrators need to feel the full force of the law, as do those who carry out violence fuelled by prejudice against any other minority group in society.

But to suggest that these bus ads would have fuelled a fresh wave of ‘homophobic’ killings is at very least stretching it and at most frankly risible.

His third assumption is that the bus ads are ‘homophobic’. This is the label commonly thrown at anyone who questions any of the presuppositions of the gay rights lobby. But again it is an unwarranted assumption. The bus ads, taken at face value, appear to be motivated by the belief that sexual orientation, at least in some people, might actually change. This is not a moral viewpoint but a hypothesis open to scientific enquiry. It is also a belief held by prominent members of the gay community!

Pemberton’s fourth unstated assumption is that homosexual orientation is a characteristic analogous to skin colour or sex. Again this is highly contentious. In fact I’d suggest that to compare a predominant direction of sensual attraction, which is what sexual orientation is, with a genetically determined biological characteristic like skin colour or sex, is to make a basic category error.

That is, unless of course, one can prove that sexual orientation is genetically determined, something that so far no one has been able to do. In fact the current consensus is that it is a complex product of genes, upbringing, choice and habit.

It is high time that more people started calling the bluff of the gay rights lobby and questioning their unsubstantiated assumptions, name-calling and debating techniques.

There are important issues of public policy here to debate. Let’s try to do so in a spirit of robust openness without labeling and the intervention of thought police intent on closing down reasonable discussion.

The great irony about all of this is that those who are claim to advance ‘liberal values’ seem also to be those most intolerant of people expressing views that are different from their own. Not a healthy precedent for a liberal democratic society.
Posted by Peter Saunders at 06:35