Islam, Judaism and Christianity – which one, if any, is true? 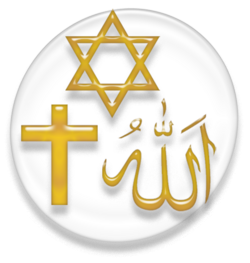 If we take the three main theistic religions - Islam, Judaism and Christianity - one of which is believed broadly by almost half of the world's population - we find they have several striking similarities.

All share belief in an all knowing, all powerful creator God who made the universe.

All share belief that God has intelligibly revealed his will in the course of history and strikingly all began in Middle East and trace themselves back to a common ancestor Abraham who once lived in what is now Southern Iraq.

The similarities are astounding - but there are profound differences too - and the most striking difference between them is in their beliefs about one person Jesus Christ.

The traditional Jewish view is that Jesus was a sorcerer and a false prophet who led people astray and died on a Roman cross.

Muslims see him as a prophet of God who spoke God's word who didn’t die but was taken up to heaven by God whilst still alive.

And Christians believe that he was God himself visiting the planet in human form who died on a cross and rose from the dead.

Now clearly these three beliefs about Jesus can't be equally true - because they are mutually exclusive. But they are also subject to historical enquiry. Either Jesus was God or he wasn’t, and either he died and rose again or he didn’t.

So it would make sense that if we want to know which theistic religion is true - if any - it makes sense to focus first on Jesus Christ.

Some atheists think that Jesus never existed - but in fact apart from the four biblical historians accounts there is substantial evidence for his existence from contemporary Roman and Jewish historians like Tacitus and Josephus. We know that the records we have passed down are historically reliable - because they were written by eyewitnesses and because we have very early written copies from which we can decipher the original text with a high degree of accuracy.

Other atheists think that he was just an ordinary man about whom a myth was made - but worshippers and critics alike who lived at the time did not disagree about the quality of his moral teaching or the fact that he performed astounding miracles: miracles which demonstrated power over disease, people and the forces of nature.

Some like to domesticate Jesus Christ into nothing other than a great moral teacher - but the claims which he made about himself, make such a belief unsustainable.

Someone who gave great moral teaching but also claimed that he...

…would not be simply a great moral teacher.

Of course it was for just these claims - and not his teaching nor miracles - that eyewitnesses tell us Jesus was executed by the Roman authorities by being nailed to a wooden cross.

Many people think that Christianity is an ‘arrogant’ religion - and in the sense that it claims to be the truth - as all religions do - this is true.

But, according to the eyewitnesses, these claims were made by Jesus himself - and if Jesus really was God visiting the planet in human form demanding allegiance from us human beings - then I'd suggest that to accept the fact and act accordingly is actually to act in humility not in arrogance.

The height of arrogance would rather be to ignore God's clear call in a world that belongs to God.

1.Jesus is God and will judge all of us and determine our ultimate destiny in heaven or hell
2.He came to earth on a rescue mission which involved dying on the cross and rising from the dead to ensure that if we respond in the appropriate way we can face judgement after death with confidence

My hope, if you are not currently a Christian, is that you might have the humility to accept the possibility that these beliefs might just be true and to examine the evidence.

You may currently be sitting on the fence and that’s fine. I wouldn’t expect you to make any commitment unless you became convinced on the basis of the evidence that Christianity was credible enough to commit yourself to. But the question is ‘are you prepared to look at the evidence?’

Personally I don't think that that is arrogant to ask you to consider evidence that may have huge implications for your future.

It’s surely no more arrogant than giving a hearing to a doctor who claims to have some wonderful new cure for some disease you might have a hearing. It may well be in your best interests and at very worst isn’t going to do you any harm.

So how about it?
Posted by Peter Saunders at 04:48