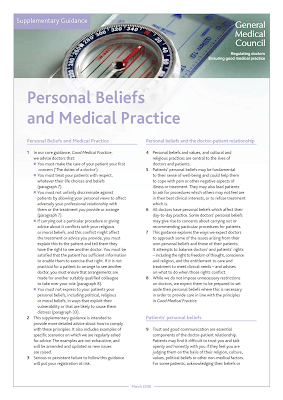 The most contentious and controversial of these is ‘Personal Beliefs and Medical Practice’ (PBMP), which deals with issues around faith discussions within a medical consultation and conscientious objection.

The review is crucially important because, once finalised (definitive guidance will be published in November), these nine documents will be the basis on which doctors are judged and those who breach the rules will be at risk of disciplinary proceedings and losing their medical registration.

The consultation is part of the on-going review of the GMC’s core guidance Good Medical Practice and is open to anyone who wishes to comment on the issues raised. It opened on 18 April and closes on 13 June so there are less than three weeks of an eight week consultation period left to respond.

So the time to respond is now.

You can respond either directly online via the GMC website (you will need to register) or by filling in an emailable pdf covering all nine documents to send to the GMC (Note that you must type directly into this form and cannot cut and paste an answer from another document!)

CMF’s recent comments on the 2008 draft of 'Personal Beliefs and Medical Practice' are available on the CMF website.

However the new 2012 draft for consultation has been substantially rewritten and builds on the latest draft of ‘Good Medical Practice’ which, ironically, has not yet itself been published.

It states that ‘we don’t wish to prevent doctors from practising in line with their beliefs and values, as long as they also follow the guidance in Good Medical Practice’ but also makes it explicit (p4) that in situations of conflict ‘we expect doctors to be prepared to set aside their personal beliefs’.

This means in essence that when there is any conflict, 'Good Medical Practice' trumps the doctor’s conscience.

The main points to note about the new draft ‘Personal Beliefs and Medical Practice’ are as follows:

Although the guidance addresses the importance of ‘adequately assessing the patient’s conditions, taking account of their history (including the symptoms, and psychological, spiritual, religious, social and cultural factors)’ there is very little if anything on the relationship between personal beliefs and health or of the importance of practising holistic care which addresses these issues in practice.

Instead the emphasis is on not expressing ‘personal beliefs (including political, religious and moral beliefs) to patients in ways that exploit their vulnerability or that are likely to cause them distress’ or, alternatively, not ‘allowing your personal views to affect your professional relationships or the treatment you provide or arrange’ (based on paragraphs 54 and 60 of ‘Good Medical Practice’).

There has been further tightening of restrictions about sharing personal beliefs. The guidance now says (para 13) that:

‘During a patient consultation, you may talk about your own personal beliefs only if a patient asks you directly about them or if you have reason to believe the patient would welcome such a discussion. You must not impose your beliefs and values on patients, or cause distress by the inappropriate or insensitive expression of them. You should keep the discussion relevant to the patient’s care and treatment and, as with disclosing any personal information to a patient, you must be very careful not to breach the professional boundary that exists between you, and must continue to exist if trust is to be maintained’.

It is hard to see how this will not lead to a greater number of vexatious complaints. Surely it would have been sufficient simply to have said that any sharing of personal beliefs must be done with permission, sensitivity and respect and with the patient’s best interests foremost. Trust is after all best built through openness and compassion.

The draft guidance notes (p3) that ‘in some areas the law specifically entitles doctors to exercise a conscientious objection’. It amplifies in a footnote that ‘in England, Wales and Scotland the right to refuse to participate in terminations of pregnancy is protected by law under Section 4(1) of the Abortion Act 1967’.

It further clarifies, in a footnote to Endnote 5, that this includes ‘care which is necessary preparation for performing a termination’. It also confirms (P3 footnote) that ‘the Human Fertilisation and Embryology Act 1990 prevents any duty being placed on an individual to participate in any activity governed by the Act’.

By offering some further clarification about preoperative care for abortion this is a slight improvement on the 2008 draft.

4.The obligation to refer

The guidance says (p5) that doctors ‘may choose to opt out of providing a particular procedure because of (their) personal beliefs and values’ and must tell the patient (p8b) ‘that they have a right to (see) another practitioner who does not hold the same objection’.

If it is ‘not practical for a patient to arrange to see another doctor’ then there is a duty to ‘make sure that arrangements are made – without delay – for another suitably qualified colleague to advise, treat or refer the patient’.

So it appears that there is actually a duty to participate in procedures to which a doctor might have a conscientious objection by referring patients for them. Many doctors would see this as complicity or ‘participation’. Duties should surely end with informing patients of their right to see another doctor but without the obligation to refer, especially with regard to abortion.

This clause was recently the result of a successful legal challenge(1) by doctors in New Zealand when guidance similar to ‘Personal Beliefs and Medical Practice’ was issued by the New Zealand Medical Council. The Council's proposed guidelines were held to ‘overstate the duty of a doctor with conscientious objection, by failing to give adequate recognition to the ability of that doctor to decline to provide the service requested’.

As a result the guidance has never come into effect in New Zealand. It is not inconceivable that doctors might bring a similar case here.

5.An absolute duty to participate in 'treatment'

For the first time the guidance states that there are two procedures to which doctors have no right to conscientious objection, namely ‘providing gender reassignment’ (P5 footnote) and ‘providing contraception to unmarried women’ (Endnote 2). It justifies this stance on the grounds that these procedures are ‘only sought by a particular group of patients (and cannot therefore be subject to a conscientious objection)’ under the Equality Act 2010.

It is not clear why a similar argument does not apply to providing male circumcision for religious or cultural reasons as this is also sought only by groups who are supposedly protected under the Act. The GMC appears to be applying the law here in an inconsistent way and may well also be opening itself up to potential legal challenges in the future. It might be argued that very few doctors are involved in gender reassignment anyway and those who are, given that it is a specialised field, would not wish to exercise conscientious objection.

However it is likely that the clause on gender reassignment will be interpreted to include everybody in the referral and treatment pathway and potentially many GPs. Similarly, most doctors do not have an objection to prescribing for unmarried women but there are some who do and argue their case strongly on grounds of protecting the patient’s best interests. And there are circumstances where most doctors would hesitate to prescribe, especially if they were concerned about sexual coercion or abuse.

But the thing which is perhaps most concerning about this new absolute duty to ‘provide’ certain ‘treatments’ or ‘procedures’ is that it seriously undermines a doctor’s professional judgement and conscience. Doctors simply should not be forced to do things they believe are morally wrong, clinically inappropriate or not in a patient’s best interests. Reasonable accommodation should be made. The GMC should be upholding conscience, not eroding it.

The GMC is asking doctors six yes/no questions about the draft guidance and for each of these gives options of answering ‘yes’, ‘no’ or ‘not sure’ as well as leaving space for comments.

The consultation deals only very superficially with the issues raised by the guidance, misrepresents to some extent its real contents and doesn’t ask specifically about the things which raise the most concerns. It also does not invite comments on how the text should be specifically reworded to address concerns doctors might have.

The six questions on 'Personal Beliefs and Medical Practice' are found on pages 26-29 of the emailable pdf. If you are only responding to this document (the pdf deals with all nine) then you need only fill in these pages and the personal details and survey from page 41. The questions (with preamble) are as follows:

Personal beliefs and medical practice was first published in 2008 in response to enquiries from doctors and others on issues in this area. We asked for views about the current guidance earlier this year (February 2012) before we redrafted (see CMF’s comments on prior draft). Now we’d like to know what you think about this draft guidance.

The guidance provides more detail about what doctors should do if their beliefs conflict with carrying out particular procedures, or giving advice about them. Currently we allow doctors to withdraw from providing all arranging treatments or procedures on the grounds of conscience, whether or not this is covered by legislation.

2 Do you think this is a reasonable position for us to maintain?

3 Is the guidance on gender reassignment clear? If no or not sure, please say why.

4 Are there any references to supporting information we could include to make the guidance more helpful to doctors?

5 Is the guidance clear?

6 Do you have any other comments on Personal beliefs and medical practice?

I would encourage all doctors, and anyone else with an interest, to respond to the consultation.

Once the guidance is set in stone it will be the standard all doctors are judged against.