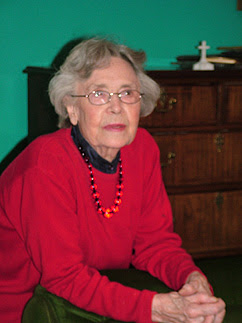 Bowman, who was described today as a 'leading light of the global pro-life movement', died peacefully this morning in Hammersmith Hospital, west London, with her family at her side.

For over 40 years she played a leading role in efforts to overturn the Abortion Act, which has claimed millions of lives since it was passed in 1967. She also fought tirelessly against efforts to legalise euthanasia in Britain.

She was a key figure in the founding of the Society for the Protection of Unborn Children (SPUC) in January 1967. In 1998 she left SPUC and went on to found Right to Life, one of Britain’s leading pro-life political lobbying organisations.

There is a list of fitting tributes to Phyllis in a Catholic Herald article posted today.

I consider it a great privilege to have known her. Phyllis's tireless efforts against much opposition for those most vulnerable members of our society have made a huge impact and have inspired many to follow in her footsteps.

Thanks be to God for Phyllis Bowman.