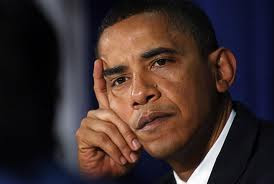 US President Obama yesterday gave his endorsement to the legalisation of same-sex marriage.

Here is a full transcript of his statement courtesy of Life Site News.

Their report also gives an interesting account of how Obama's views have changed back and forth on this issue over the years.

It is thought that Obama was placed in a position of having to make this statement as his Vice-President Biden had done the same two days earlier. Leading Republican Presidential candidate Mitt Romney immediately expressed his opposition to legalisation.

I have previously posted my 'Guardian Reader's Guide on Biblical teaching on Sexuality' which takes a different position to that Obama currently holds.

See also my 'Ten Reasons not to legalise same-sex marriage'.

I have to tell you, as I said, I’ve been going through an evolution on this issue. I’ve always been adamant that gay and lesbian Americans should be treated fairly and equally. That’s why in addition to everything we’ve done in this administration — rolling back Don’t Ask, Don’t Tell, so that outstanding Americans can serve our country, whether it is no longer defending the Defense Against Marriage Act which tried to federalize what has historically been state law — I’ve stood on side of broader equality for the LGBT community. And, I hesitated on gay marriage in part because I thought civil unions would be sufficient. That that was something that would give people hospital visitation rights and other elements that we take for granted. And I was sensitive to the fact that for a lot of people, the word marriage was something that evokes very powerful traditions, religious beliefs and so forth.

But I have to tell you that over the course of several years as I have talked to friends and family and neighbors when I think about members of my own staff who are in incredibly committed monogamous relationships, same-sex relationships, who are raising kids together, when I think about those soldiers or airmen or marines or sailors who are out there fighting on my behalf and yet feel constrained, even now that Don’t Ask Don’t Tell is gone, because they are not able to commit themselves in a marriage. At a certain point, I’ve just concluded that for me personally, it is important for me to go ahead and affirm that I think same-sex couples should be able to get married.

Some of this is generational. You know when I go to college campuses, sometimes I talk to college Republicans who think that I have terrible policies on the economy, on foreign policy, but are very clear that when it comes to same sex equality or, you know, sexual orientation that they believe in equality. They are much more comfortable with it. You know, Malia and Sasha, they have friends whose parents are same-sex couples. There have been times where Michelle and I have been sitting around the dinner table and we’re talking about their friends and their parents and Malia and Sasha, it wouldn’t dawn on them that somehow their friends’ parents would be treated differently. It doesn’t make sense to them and frankly, that’s the kind of thing that prompts a change in perspective.

This is something that, you know, we’ve talked about over the years and she, you know, she feels the same way, she feels the same way that I do. And that is that, in the end the values that I care most deeply about and she cares most deeply about is how we treat other people and, you know, I, you know, we are both practicing Christians and obviously this position may be considered to put us at odds with the views of others but, you know, when we think about our faith, the thing at root that we think about is, not only Christ sacrificing himself on our behalf, but it’s also the Golden Rule, you know, treat others the way you would want to be treated. And I think that’s what we try to impart to our kids and that’s what motivates me as president and I figure the most consistent I can be in being true to those precepts, the better I’ll be as a as a dad and a husband and hopefully the better I’ll be as president.