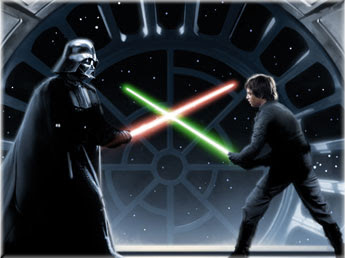 I have always liked Shane McKee. I first met him back in the early 1990s when he was a 4th year medical student and part of the Christian medics group at Queen’s, Belfast. I was working with CMF.

He has since turned to the dark side and is now an exponent of what he calls ‘Christian Atheism’ but, like Darth Vader, there is still good in him. Shane is what GK Chesterton might have called a ‘loveable heretic’ (Peace Shane :-))

He is now a consultant geneticist in Northern Ireland and I am still working with CMF.

I last saw him in Belfast back in 2006 when we had a drink together but we have crossed sabres often since both on doctors.net and on twitter. We probably both spend a bit too much time on the latter.

Anyway, Dr John Cosgrove (@DrJohnCosgrove) suggested we should publish some of our conversations so with Shane’s agreement I have pasted one below.

The context is that during the CMF national conference Shane started tweeting using the conference hashtag (#ukcmf12) - secretly we think he wanted to be there and was craving the attention of Christians - so I responded.

The following discussion thread has a couple of branch points but you will get the thrust. We started off talking about how Shane lost his faith and then it kind of meandered off in various other directions.

Shane explains how he lost his faith

SM: Any of you #ukcmf12 delegates wondering what the godless heathens are doing... http://www.youtube.com/watch?v=-3We_tikbCs:-) #space @TheNiceLadyDoc

SM: Incidentally, came across this song I wrote back in the days I was still a "believer". http://www.youtube.com/watch?v=gpJUDeGktKY Enjoy (or other :-) #ukcmf12
View video

PS: Can't hear the words on this recording Shane. Is it true that you lost your Christian faith in Israel on your elective in 1993?

SM: it was the icing on the cake - you could call it a revelation - a deeper understanding or a rending of the Temple veil :-)

PS: Who was it a revelation from and how did it happen exactly?

SM: a revelation from the evidence - a clearing of Saul Paulus's vision through a glass darkly :-) #Christian #Atheism

PS: So what particular evidence did you encounter in Israel that was the icing on the cake for you?

SM: also, the sheer banality of it all - simutaneously awful, beautiful & fascinating. U been to Bethlehem?

PS: No I haven't. The only literal footsteps of Jesus I've followed were from Tyre to Sidon. btw that's not evidence you've given.

SM: evidence that the "verification" of faith is the same across incompatible religions, ie worthless.

PS: The fact that holders of mutually contradictory worldviews use similar arguments does not mean that all of them must be wrong

SM: No, but it means that you can't use that argument to demonstrate that you specifically are *right*. Back to square one.

PS: Are you saying that all three faiths used 'personal experience' or a sense of God's presence as evidence their beliefs were true?

SM: The precise terminology differs in different religions, but it is the same psychological phenomenon.

PS: So did that then lead you to doubt your own subjective sense of God's presence? Was that the key issue for you? A bit Mormonoid?

SM: not Mormonoid in the least! This subjective feeling was leading people in multiple different ways. Even in Christianity!

PS: No mate it's Mormon.The subjective experience as a test of truth. See Moroni 10:4. Utterly heretical of course. No wonder you fell

SM: It wasn't that I stopped feeling it. It's a human subjective phenomenon. Not valid, contra Saul Paulus.

PS: Perhaps widely touted but it is not an evidence of faith nor reliable assurance and the Bible doesn't teach it is. You were duped!

SM: Of course it's not a clincher point, but if you're saying the voice of HS is not used as an argument, you're wrong, dude!

PS: It's used but not valid as assurance. Biblically assurance is based on belief in JC's death/resurrection,fruit of spirit,obedience

SM: indeed, but none of those are valid either. They're just specific wordings of the same basic subjective flaw.

PS: No the difference is that they are objective tests as well. You can't fake a changed life. It is either there or it isn't.

SM: that's even worse! Muslims claim changed lives too. So do many others. "Fruits of the Spirit" = subjective

SM: the Mormons are, however, pretty special in the crazy stakes ;-) Cross the Pacific in SMin submarines LOL!

PS: Yes I agree but it's a clever deception that's duped many intelligent people including the next republican presidential candidate!

SM: but it's *not* clever - that's the point. People are primed to believe total bullshit, eg Joshua's Long Day

PS: Not clever enough to suck u in mate but the POD didn't need 2 employ that deception.He already had u with another! Why waste ammo!

SM: besides, maybe the PoD could change your life to make you *think* you were following the right messiah candidate...

PS: Oh they tried that one on Jesus. No he's not capable of it & anyway his kingdom would then be divided cos he'd be fighting himself

SM: leaving aside the fact that that's silly talk, it's pretty bloody clear that "Jesus's" kingdom is infighting!

PS: The fact that Christians have fallen out over various things since Paul and Barnabas doesn't negate the truth of what Jesus taught

SM: but that's not the point. The point is that you have no basis for the core assertions of Christianity as "fact".

PS: There's sufficient evidence 4 reasonable enquirers but not 4 those with a prior commitment 2 clever deception.Must get to bed ttyl

SM: there's insufficient evidence for anyone interested in what *really* happened, rather than a bedtime story. Night-night! :)

SM: that's OK. What about if you knew that Jesus didn't actually rise from the dead?

PS: Well you know what St Paul said.If Jesus didn't rise from the dead then that's the end 4 Christianity. It becomes just another lie

SM: So you're a Paulinian, rather than a Christian? What did Jesus have to say on the topic?

PS: Well Jesus repeatedly said he would be killed and rise from the dead so if he didn't that makes him a false prophet or just wrong.

SM: the reality is that we have very little evidence of what Jesus said about his own death & no indication his disciples knew!

SM: Irrelevant. ALL Jesusisms filtered through ppl who disagreed like P&B. All with competing agendas.

Parallel thread on the Prince of Darkness

SM: yep - worked it out :-) Nah- he hasn't got me any more than Santa or Cock Robin. You're too smart for that too.

PS: He's not got Santa or Cock Robin cos they don't exist but he's got you by the balls. Well and truly. You're one of his troops! :-)

SM: how do you know they don't exist?

PS: Oh I don't know for sure. They could exist somewhere we haven't looked or in some parallel universe I guess. But redsox has you!

SM: How do you know that redsox hasn't got *you* and fooled you into thinking he's a messiah? Maybe Ba'al is really God?

PS: Mate you know that Ba'al (if he exists at all) got his comeuppance on Mt Carmel after being mocked and humiliated by Elijah.

SM: but again that's just a story. I'm sure the Baalists would have had similar anecdotes - he was still worshipped into CE!

PS: Well there's one born every minute isn't there! Some people don't require a very elaborate or clever deception to be totally duped

PS: Mate I wouldn't insult u 2 that degree. I'll concede that the deception that has snared you is one of the best there is. Blessings!

SM: it's not an insult - you're human too. Just remember, it's very very easy to fool humans. That's one lesson from Mormons!

PS: Of course I am. Mate u know that I hold u in the highest regard and care for you deeply. I wouldn't bother debating u otherwise.

SM: did you look at my Church of Jesus Christ Atheist blog? Not much action on it lately…

SM: this is the core issue - we are all just humans, trying to discover & get along. Glass darkly etc :-) 1st priority: truth.
Posted by Peter Saunders at 15:05