New advances in embryo testing may result in higher success rates for IVF but at what cost? 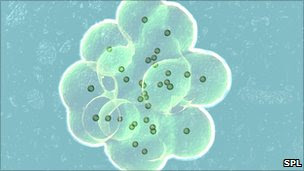 Two new embryo screening tests have been recently developed that researchers believe will increase success rates for women having a health baby after IVF treatment.

At present only about 30% of women under 35 have a baby following IVF and this percentage drops with age falling to 10% by age 40.

The new tests enable abnormal embryos to be indentified five days after fertilisation and before being implanted in the womb.

If embryos judged unlikely to survive are not implanted, it follows that the chance of a pregnancy reaching term is higher.

The first new test involves measuring the uptake of glucose by early embryos. Glucose is an energy source essential to growth and its low uptake is therefore a marker of poor growth in the early embryo.

Researchers at the University of Melbourne in Australia have developed the technique.

Their research involved 50 patients undergoing IVF. 32 of the women had a positive pregnancy test after embryo transfer and 28 babies were born. These 28 babies resulted from the embryos which had the highest glucose uptake. Controversially the method also has the potential to predict the gender of an embryo prior to implantation, as female embryos appear to take up more glucose than males.

The second new test involves determining the number of chromosomes in the developing embryo. The BBC has run the story this morning apparently after receiving a press release from specialists at CARE Fertility in Manchester. This will probably make it big news. However the story is not new and was covered by the Daily Telegraph and Bionews (amongst others) over a week ago. Those interested in knowing more about the technique will far more usefully spend their time examining these accounts.Tony Rutherford, chair of the British Fertility Society, expects the test will take two to three years to develop.

Aneuploidy (read more here)– an abnormal number of chromosomes – is responsible for a high percentage of pregnancies that spontaneously abort and is increasingly common with age.

But fertility specialists in the US state of New Jersey are claiming to be able to double IVF success rates by selecting out embryos with either too many or two few chromosomes. A Denver specialist has explained why the test is of particular importance to women over 35. He said, ‘By the time you’re in your mid-30s about 50 per cent of embryos are abnormal; by 40, 75 per cent are; and by 42, 85 to 90 per cent are’.

Fertility drops off rapidly after age 30 probably mainly for this reason. So it appears that the demand for this technology will be greater the more women, for whatever reason, delay trying for a baby.

So what of the cost?

The NHS currently provides funding for one cycle of IVF for women who have met the clinical definition of infertility, providing they have an identifiable cause to their infertility. After that couples have to pay. According to the Human Fertilisation and Embryology Authority (HFEA) the average cost of one cycle of IVF including drugs is between £4,000 and £8,000.

Preimplantation genetic diagnosis (PGD) – determining if the embryo is genetically abnormal before implantation – currently costs between £1,000 and £2,000 but it is likely that these new embryo screening tests, should they become commercially available, will cost considerably more. Cheaper options overseas will no doubt fuel more IVF tourism in future. Regardless, in an era of shrinking health budgets this is technology that is increasingly going to be only the reserve of the rich.

But money is only one part of the cost of IVF. There is also the emotional cost of being on the emotional roller coaster of a treatment for which results are not immediately obvious (confirming a successful pregnancy takes time) and where there is still a high probability of failure. 30% success rates are also 70% failure rates.

And finally there is the moral cost. This new technology is essentially eugenic. It involves identifying and discarding (or not implanting) embryos that are judged to be abnormal. It might be argued that many of these would not have survived pregnancy anyway - embryos for example with trisomy 16 inevitably do not survive pregnancy – but a significant number do.

Are we therefore saying that embryos which can not look forward to a life without disability should not be given the chance to live?

Interestingly the Pope is quoted in the Hindustan Times just yesterday on this very issue. He said, ‘it is indispensable that new technological developments in the field of medicine never be to the detriment of respect for human life and dignity, so that those who suffer physical illnesses or handicaps can always receive that love and attention required to make them feel valued as persons in their concrete needs.’

He added that the number of people with Down syndrome ‘has declined mostly because a good number of them are eliminated before they are born.’

In December 2008, the Vatican issued a document affirming the ‘dignity of the human embryo’ which listed biomedical techniques considered ‘illicit’ by the Roman Catholic Church. These included in vitro fertilisation, cloning, the therapeutic use of stem cells, producing vaccines from embryo cells and the ‘morning-after’ pill.

Such practices go against the ‘fundamental principle’ that the dignity of the person must be recognised from conception until natural death, it said.

Quite!
Posted by Peter Saunders at 22:52