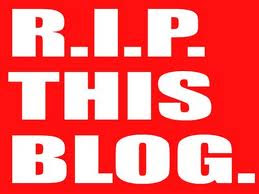 The Dignity in Dying blog has opted for assisted suicide after apparently suffering unbearably from a terminal condition.

Speculation is mounting as to why the blog chose this course. Some have suggested it may have come under pressure from authors who found it a burden to care for and were concerned about the resources its continued existence was consuming.

Others have said that it probably just felt lonely having so few readers and only nine ‘friends’, of whom only two (Ellen Coaty and Sarah Masson) had real names. In support of this they point out that one of the other seven, went under the nom de plume of ‘Comfort Blanket’ and may have been drafted in to provide palliative care.

The Dignity in Dying blog was launched on 2 November 2009, by the former Voluntary Euthanasia Society and amassed185 posts before taking the decision to end its own life on 3 August at the tender age of 21 months.

It debuted at 18,374th place in the UK Wikio blog rankings in November 2010 and never broke into the 15,000 most popular blogs by the time of its premature death, apart from a brief appearance at 6,053rd place in June this year. This turned out, however, to be a false dawn as it subsequently plummeted to 15,917th last month and finished its life ranked at 15,393 with a wikio score of 0.0.

Most people will be surprised to learn that there are actually this many blogs in Britain.

Its first post on 2 November 2009 optimistically stated, ‘I also hope that this blog charts the progress of an exciting and progressive campaign. What will this blog achieve? Who knows for sure?’

Well now we do know - not very much at all!

It is somewhat bizarre that an organisation which claims to have 25,000 supporters was unable to attract more of them to read the scribblings of its supposedly strongest communicators. At very least it raises big questions about the coherence of the message it was attempting to convey.

James Harris, the blog’s principle author, who describes himself as ‘responsible for DID’s campaigns and communications strategy’ will certainly have some questions to answer.

I’m almost expecting a spokesman for Dignity in Dying, distressed after witnessing the death of the blog, suggesting that DID might start a new campaign to push for an 'assisted death' for other blogs which are ‘suffering unbearably from a terminal condition’ and suggesting that ‘robust up-front safeguards’ could be introduced to prevent abuse.

If so, the debate would no doubt rage over whether the DID blog was really terminally ill or just profoundly disabled. And critics might say that the number of blogs which wish to end their lives was actually vanishingly small and that with proper support from some good writers most actually pull through.

Others might add that changing the law could place pressure on other blogs with weary authors to end their lives prematurely – and that ‘hard cases’ like the DID blog make bad laws.

And then DID might claim that a similar law allowing assisted suicide for blogs in a small corner of a very large country several thousand miles away had not led to an increased number of blog deaths, and so on and so forth.

Perhaps it was actually the right decision to let DID end it all now to protect us all.

I gather that DID’s staff have now launched a new blog which they hope will enjoy greater success. I wish them good luck.

The last one will certainly not be a hard act to follow.
Posted by Peter Saunders at 15:53

Email ThisBlogThis!Share to TwitterShare to FacebookShare to Pinterest
Labels: Dignity in Dying, Euthanasia