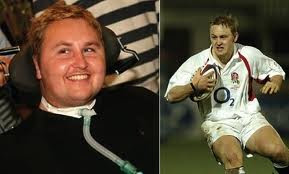 'Engage!' was the last word Matt Hampson heard before dislocating his neck while in rugby training with other young England hopefuls. On a cold, grey, overcast day in 2005, the cream of young English rugby gathered at a Northampton training ground. Matt Hampson, 'Hambo' to his mates, was one of them. He had dreamt of playing rugby for England ever since he had picked up a rugby ball at school. His skill, conviction and dedication had brought him to the cusp of realising that dream, in an England U21 team that included Olly Morgan, Toby Flood, Ben Foden and James Haskell. But as the two sets of forwards engaged for a scrum on the training field, the scrum collapsed and Matt, who played tight-head prop, took the full force of two opposing sides. In that moment his life changed forever.

The Sunday Times carries this morning an extended piece on Matt Hampson which is a must-read. If you don’t have an on-line subscription go out and snap up a hard copy. He has also recently been interviewed on BBC1 (watch here).

I once had the privilege of spending half an hour with Matt (pictured), who ended up permanently paralysed from the neck down and on a ventilator after the accident, but now runs a charity to support people who are, in his own words, ‘less fortunate than himself’. ‘I don’t think about what I can’t do. I think about what I can do’, he told me.

I can’t reproduce the whole Sunday Times article here but have pasted a few excerpts below:

I drank too much in the first two years after my accident; some of it to remember, most of it to forget, but I never lost sight of the pact I had made with my father at Stoke Mandeville one night. He had come straight from work on his own and maybe it was the reality of my condition hitting home or a fight he had had with Mum but he was oozing pain from every pore.

We sat in silence for what seemed an eternity, trying to find some positive that might emerge from my injury. And trying. And trying. It was desperate. There was nothing; just the whoosh of the ventilator taunting us. Then I said: ‘I think it will make me a better person in the long run, Dad.’ I didn’t mean it and I’m not sure I believed it but I’d have said anything to ease his pain and it seemed to give him a lift.

A month later, I gave my first interview since the accident to The Sunday Times but the stand-out quote was my father’s: ‘One thing Matthew said to me which I couldn’t believe was, “I’ll be a better person for this in the long run, Dad.” I thought it was an amazing thing for a 20-year-old to say. I don’t think I could have said it.’

And that was it. I would strive to be a better person. I had promised Dad.

We abandoned our meal and were halfway down Broad Street when the battery went flat. The ventilator stopped. There was nothing going into my lungs and I was suddenly gasping for breath.

Think of a fish a moment after it is plucked from the sea; watch it thrash up and down on a harbour wall and imagine how that might feel. Except that you can’t; not the shock or the vulnerability or the sheer f****** terror of it, not even when there’s a plan B.

As Tom was dispatched at speed to the van for another battery, Jacqui whipped the tube from the cuff on my neck and replaced it with a small rubber bellows stored permanently in the emergency bag. Then, cupping the device with her hands, she began pumping air into my lungs.

As we waited for Tom to return, each minute felt like an hour. I did my best to appear calm but couldn’t avert my gaze from Jacqui’s fingers. It must feel very odd indeed to hold a human life in your hands, and, though she applied herself with steely concentration, there was no disguising the strain.

Meanwhile, it was business as usual for shoppers on Broad Street. Nobody offered to lend a hand. Nobody offered to call an ambulance. There we were, stranded on one of Britain’s busiest streets, and it was as if a paralysed man being given a blow-job was the most natural thing in the world.

Daniel James was also a paralysed rugby player but became a household name in October 2008 when he ended his life at the Dignitas suicide facility in Zurich, Switzerland. Hampson describes going to meet him some months earlier:

The first thing that struck me was that he had come down from the ward on his own — he didn’t have a carer supporting him. The second thing was how reluctant he was to engage. I encouraged him to focus on the possibilities, not the problems, and spoke of some of the things I had enjoyed since leaving hospital. The sun kissing my face on a warm summer’s day. The smell of fillet steak grilling on the barbecue. The laughter of friends sipping beer in the garden. The Six Nations championship and autumn internationals at Twickenham. The pleasure of watching Leicester Tigers, my old rugby club, beat Wasps. The Christmas tasting menu at Gordon Ramsay’s in Chelsea.

‘But make sure you bring your wheelchair,’ I joked, ‘because you won’t be able to walk out of there.’ It just seemed to wash over him. He wasn’t interested in talking about the future. He just wanted me to go. 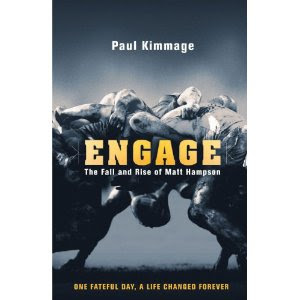 A scene from The Shawshank Redemption, my favourite movie, always helps me to refocus. It’s the one where Andy Dufresne, the main character, who is in jail for the murder of his wife and her lover, has come out of a long spell in solitary and is telling his friend Red about Zihuatanejo, a warm place on the Pacific ocean in Mexico.

He asks his friend to join him if he ever manages to get out of prison. But Red isn’t sure.

‘I don’t think I could make it on the outside, Andy. I’ve been in here most of my life. I’m an institutional man now.’ And then (Andy) says it, the greatest line in the history of cinema, and my creed: ‘I guess it comes down to a simple choice really — get busy living or get busy dying.’

As I have argued before, stories of triumph over adversity like Matt’s should get more airtime and column inches. They are a wonderful ray of hope.

Email ThisBlogThis!Share to TwitterShare to FacebookShare to Pinterest
Labels: Testimony