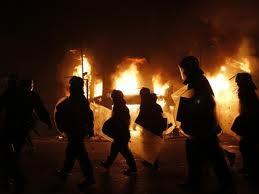 Someone I know received the following message on his blackberry some hours ago. It dispels the narrative that the London riots are simply some sort of reaction to material deprivation and the credit crunch.

Ken Livingstone has taken the opportunity to blame the scale of the rioting on the policies of the current government leading to unprecedented levels of disaffected youth. But this is dangerously simplistic political opportunism.

What we are seeing is primarily opportunist thuggery. The reason all this is happening now with such ferocity is because messages like the following have gone viral on social media networks and are being acted out by people with no internal controls.

It is the social media dimension which enables the culprits to move so fast to start new flash-points and surprise the police.

Blackberry and other outlets must be able to trace the original culprits who sent the messages and those who have passed it on:

'Everyone from all sides of London meet up at the heart of London (central) OXFORD CIRCUS!!, Bare SHOPS are gonna get smashed up so come get some (free stuff!!!) f*** the feds we will send them back with OUR riot!
Dead the ends and colour war for now so
if you see a brother... SALUT!
if you see a fed... SHOOT!
We need more MAN then feds so Everyone run wild, all of london and others are invited! Pure terror and havoc & Free stuff....just smash shop windows and cart out da stuff u want! Oxford Circus!!!!! 9pm, we don't need pussyhole feds to run the streets and put our brothers in jail so tool up,
its a free world so have fun running wild shopping;)
Oxford Circus 9pm if u see a fed stopping a brother JUMP IN!!! EVERYONE JUMP IN niggers will be lurking about, all blacked out we strike at 9:15pm-9:30pm, make sure ur there see you there. REMEMBA DA LOCATION!!! OXFORD CIRCUS!!!
MUST REBROADCAST TO ALL CONTACTS!!!'
Posted by Peter Saunders at 15:51