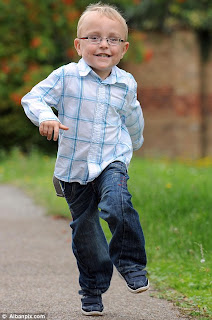 The mother of a boy, now five years old, who was born prematurely at 23 weeks gestation, has again ignited the debate about upper gestational limits for abortion.

Charlie Allen’s survival prompted his mother Emma, a business support executive, to say that he was living proof that the limit on abortion should be reduced from 24 weeks.

It is currently up to individual health trusts to decide whether or not they follow NHS guidelines on not resuscitating babies born earlier than 24 weeks.

Mrs Allen was given the choice to resuscitate her identical twins when she gave birth at Norfolk and Norwich University Hospital and opted to go ahead. Sadly her other twin died but Charlie pulled through and is now thriving.

She said: ‘Fortunately for us, there was no blanket policy in place at Norfolk and Norwich. It makes me so angry that I want to cry when people say babies at 23 weeks should not be resuscitated. Look at Charlie – the very fact that he is here and is well, is living proof that they should be.’

The only tell-tale sign of Charlie’s traumatic entrance into the world is that he is short-sighted and is smaller then the average five-year-old, weighing just two stone and wearing clothes made for three-year-olds.

Mrs Allen said: ‘He may be on the small size, but Charlie can more then look after himself. I still see the fighting spirit in him that saved his life when he was just a baby.’ 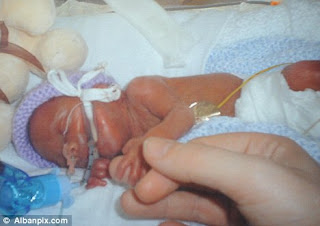 Recently I commented on the story of Jacob McMahon, who took the title of Britain's most premature surviving twin from Charlie after he was born on February 22, just 23 weeks into pregnancy, at a weight of just 1lb 4oz (Charlie was 1lb 7oz).

The cover story in the summer edition of the CMF journal Triple Helix, written by Professor John Wyatt, reviews the recent BBC documentary ‘23 week babies - the price of life’, which represented six months of filming on the neonatal intensive care unit at Birmingham Women’s Hospital.

Wyatt raises a number of technical and clinical issues, which were not raised in the programme, to argue that every extremely pre-term baby deserves the chance to be considered for treatment.

The British Medical Association recently rejected a call to lower the upper limit to 20 weeks and I argued at the time that they were listening neither to the public nor the science on the issue.

This later case will reinforce public opinion that the law needs to change.