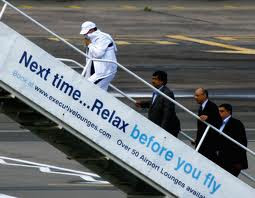 Tomorrow, 20 August, marks the second anniversary of the release from a Scottish prison of Abdel Baset Ali al-Megrahi, the only person convicted for the Lockerbie bombing.

A leading article in today’s Times, ‘Dodging the bullet’, highlights the fact that he was sent home to Libya on compassionate grounds by the Scottish government after medical advice that his advanced prostate cancer would probably kill him within three months.

Al-Megrahi has now lived eight times that long, although the Libyan Government says he is now suffering from a growth in his neck.

When Ronnie Biggs, the Great Train Robber, was released on compassionate grounds in August 2009, his family hoped he’d last until Christmas. But Biggs is also still with us.

The Times suggests we should celebrate the longevity of these two men but their survival is also a reminder of how inaccurate doctors’ forecasts of life expectancy are.

The pressure group Dignity in Dying (formerly the Voluntary Euthanasia Society) champions a change in the law to allow assisted suicide for ‘mentally competent adults who are terminally ill’, but they have recently resisted any specific definition of what they actually mean by ‘terminally ill’.

They have said it again today in relation to the case of ‘Martin’, a 46 year old man with ‘locked-in’ syndrome, who wants his doctor (or lawyer) to be able to help him kill himself.

The US state of Oregon, which legalized assisted suicide in 1997, defines ‘terminally ill’ as ‘six months left to live’ but DID CEO Sarah Wootton has even suggested twelve months on national media, and the organization has run a campaign around multiple sclerosis sufferer Debbie Purdy whose life expectancy probably runs to decades.

Six years ago a select committee of Parliament reported on a bill that would have legalised assisted suicide for those with less than six months to live. They consulted a wide range of experts on how safe such a law would be and commented specifically on the definition of ‘terminally ill’.

The references, unless otherwise indicated, are to House of Lords Report HL 86 (Session 2004-05).

So just how accurate is a prognosis of ‘six months or less’?

Here is what the experts say:

'Post mortem research and clinical audit studies performed in the UK, Europe, USA and many other countries consistently show a c30 per cent error in the medically certified cause of death. Significant errors (ie misdiagnosis of the terminal illness resulting in inappropriate treatment occurs in c5 per cent of cases' (Royal College of Pathologists, HL 86 Vol II, Page 730)

The select committee suggested that any 'assisted dying' bill should define terminal illness 'in such a way as to reflect the realities of clinical practice'. This was ignored in the Lord Joffe's 2005 bill, and there is no indication that it has been taken on board by the pro-euthanasia lobby since Parliament's rejection of that bill in 2006. In fact, if anything, they have now dropped reference to any time-scale at all.

Al-Megrahi’s and Bigg’s longevity should remind us of the unreliability of doctors’ prognostic estimates.

A fuller demolition of other so-called ‘safeguards’ arguments can be found on the Care Not Killing website.
Posted by Peter Saunders at 15:37