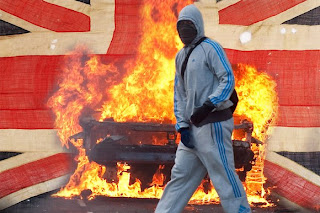 Amongst the endless reflections on the riots published this week there was an interesting article in this week’s Sunday Times by Harriet Sergeant based on her 2009 report ‘Wasted - The Betrayal of White Working Class and Black Caribbean Boys’.

In compiling the report she spent a year interviewing black Caribbean and white working-class boys – ‘the very people who have seized our streets’ - for the Centre for Policy Studies. So what were her conclusions on last week’s riots?

Ken Livingstone, the former Labour mayor of London, last week blamed coalition cuts for the riots. He forgets that (these kids) grew up under Labour. They are Blair’s babes and the left’s handiwork. It is not poverty that has stunted their lives but the policies of the previous government in three key areas: schools, work and home.

She unpacks each of these there areas in turn:

To get an insight into the rage that fuelled the riots, look no further than the statistics on illiteracy that came out the week before. At the age of 14, 63% of white working-class and more than half of the black Caribbean boys have a reading age of seven or less. Almost half of the 16-year-olds marauding our streets lack basic qualifications in English or maths.

Illiteracy is a powerful driver of bad behaviour. The US Department of Justice concluded that failing to learn to read at school ‘meets all the requirement for bringing about and maintaining the frustration level that frequently leads to delinquency’. This ‘sustained frustration’ causes ‘aggressive antisocial behaviour’.

Illiteracy is a life sentence. Half the prison population has a reading age below that of an 11-year-old.

It is not difficult nor expensive to teach a child to read. Countries a lot poorer than ours manage. But they use traditional methods shunned by our educational establishment.

Forty years ago the young men out looting on a weekday would have been in work. They would have left school at 16 and got a job in manufacturing. Now those jobs have gone.

Instead, immigration soared under Labour. Young men like these find themselves in competition with skilled and capable immigrants ready to work long hours for low pay. They lose out every time. According to the Office for National Statistics, of the 1.8m new jobs created under Labour, 99% were taken by immigrants. Since David Cameron came to power the figure is 82%.

The situation is compounded by the benefits system. Far from lifting these young men out of poverty, it bolts them down for good. I went to court with (one boy) for council tax arrears after he got laid off from his temporary agency job. The next time he found work, the adviser in the jobcentre told him not to take it. He would be £30 a week worse off than if he stayed on benefits. After that he gave up.

Politicians are demanding that parents control their children. What planet are they living on? These young men have been left to scramble up any old how. At home and in school, grown-ups are absent or ineffectual.

The lack of male role models was particularly striking. On boy said, ‘All the men I know are in prison or deal drugs. I don’t know one man with a job’.

Nearly every one of the young men I interviewed had a young single mother. Britain has the highest rate of teenage pregnancy in Europe. Despite the huge amount of evidence of the harm this causes children (mothers of children on the ‘at risk’ register, for example, are five times more likely to be single teenage mothers), the Labour government made single motherhood an attractive proposition. Since 1997 a single mother of two children has seen her benefits increase by 85%. We watched the effects of that policy play out on our streets every night last week.

To accuse these young girls of being feckless is unjust. They are merely responding to the economics of the situation. They are as much victims of the crisis in our schools and the perverse influence of benefits as teenage boys. What future is there for a girl who leaves school without a qualification? Whereas boys take to crime, girls get pregnant.

Ministers talk of family breakdown, but there is no family to break down. More than half of single mothers have never lived with a boyfriend. The state has taken over the role of both husband and employer.

She finishes with a raft of measures aimed at rectifying these three areas of deficit.

In another analysis this week, ‘How the liberals ruined Britain’, Melanie Phillips draws very similar conclusions:

The violent anarchy that has taken hold of British cities is the all-too-predictable outcome of a three-decade liberal experiment which tore up virtually every basic social value. The married two-parent family, educational meritocracy, punishment of criminals, national identity, enforcement of the drugs laws and many more fundamental conventions were all smashed by a liberal intelligentsia hell-bent on a revolutionary transformation of society.

Again she focuses on damage to the family as a root cause:

The causes of this sickness are many and complex. But three things can be said with certainty: every one of them is the fault of the liberal intelligentsia; every one of them was instituted or exacerbated by the Labour government; and at the very heart of these problems lies the breakdown of the family.

For most of these children come from lone-mother households. And the single most crucial factor behind all this mayhem is the willed removal of the most important thing that socialises children and turns them from feral savages into civilised citizens: a father who is a fully committed member of the family unit.

You will have to read the whole article to get the full force of it and the way Phillips argues that these changes have played out in work and education.

But I was particularly interested, given that she is not a Christian, in her final conclusion:

Repairing this terrible damage also means, dare I say it, a return to the energetic transmission of Biblical morality. Anyone heard from the Archbishop of Canterbury about the riots? Anyone care to guess what he will eventually say about them? Quite.

When church leaders stop prattling like soft-headed social workers and start preaching, once again, the moral concepts that underlie our civilisation, and when our political leaders decide to oppose the culture war that has been waged against that civilisation rather than supinely acquiescing in its destruction, then - and only then - will we start to get to grips with this terrible problem.

When those outside the church start calling for the church to be doing its job better it is perhaps time that we sat up and listened. I am reminded of St Peter’s words:

Email ThisBlogThis!Share to TwitterShare to FacebookShare to Pinterest
Labels: Society