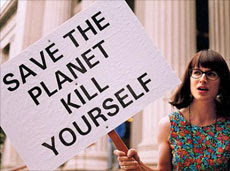 On 31 October when the world’s population reaches seven billion we will be subjected to a whole host of alarmist reports about impending disaster - through overcrowding, disease and environmental destruction - and the population control lobby, led by prominent journalists and media celebrities, will try to persuade us that our salvation lies in making contraception and abortion more widely accessible.

I have already blogged about this ludicrous proposition at length and won’t reiterate my arguments and analysis here. Instead I want to point to an excellent review article on Life Site news which highlights past false predictions of the population control lobby.

The article warns that ‘Halloween is traditionally a night of witches, ghosts, and monsters. But for environmentalists and their media allies, an even bigger scare is coming this Halloween: the birth of Earth’s 7 billionth resident’.

It then goes on to note past false predictions, most notably those of Malthus and Ehrlich, the pioneers of the movement:

Panic over population growth is not a new phenomenon. Anglican clergyman and thinker Thomas Malthus, in 1798, called for extreme measures to reduce human population in his Essay on the Principle of Population (World population was below 1 billion in 1798.): ‘Instead of recommending cleanliness to the poor, we should encourage contrary habits. In our towns we should make the streets narrower, crowd more people into the houses, and court the return of the plague. In the country, we should build our villages near stagnant pools, and particularly encourage settlements in all marshy and unwholesome situations.’ By 1890, he predicted, the world would run out of food, and thus the end of the human race would soon follow.

American biologist Paul Ehrlich echoed Malthus in his 1968 work The Population Bomb, which warned of mass starvation and environmental catastrophe due to overpopulation. (World population was below 3.6 billion in 1968.) Ehrlich made a series of fantastic predictions, including the claim:‘I would take even money that England will not exist in the year 2000.’ The United Nations Population Fund - with its population control agenda - was founded in the wake of these scaremongering predictions.

The dire warnings of Malthus and Ehrlich were proven spectacularly wrong. The New York Times stated as much in a 2003 editorial, noting that ‘population growth rates were plummeting.’ Birthrates are rapidly declining in the United States and throughout the world. And food production has increased dramatically over the past 40 years, as new methods of growing food and using resources are discovered.

But Ehrlich has refused to concede his predictions were wrong, and the media still quotes Ehrlich and raises the ghost of Malthus.

So when you start to hear all the population explosion nonsense rehashed on Monday remember these past ‘prophetic’ predictions and don’t get alarmed. Take a deep breath, read the Scriptures below and have a look at the contrary view (eloquently put by Reuters this week in an article titled 'The next challenge: not too many people, but too few?') that the real problem we are facing, at least in the Western world, is a very different demographic crisis altogether - that birth rates are falling and the relative proportion of elderly people is rising - which is why President Putin and others are looking at measures to increase rather than decrease population.

Yes the world population is rising at present and will go higher for a while. But if falling birth rates continue, which looks virtually certain, then in the not too distant future we are headed for a lengthy downward population trajectory. As Life Site News concludes:

‘Not everyone is as terrified of the overpopulation bogeyman as the media seems to be. Colin Mason, Director of Media for the Population Research Institute, explained why fears of overpopulation are unfounded: “Historically, as human population has grown and developed technology, the manner in which we use resources has changed.

For instance, as human population has grown, we have needed to produce enough food to feed our burgeoning numbers. But as our civilizations have developed, we have also developed ways of increasing crop yield, and of growing crops on previously infertile land.”’

A series of videos produced by PRI illustrate their argument that the earth is not overpopulated.

You may say to yourselves, ‘How can we know when a message has not been spoken by the LORD?’ If what a prophet proclaims in the name of the LORD does not take place or come true, that is a message the LORD has not spoken. That prophet has spoken presumptuously, so do not be alarmed. (Deuteronomy 18:21,22)

‘But there were also false prophets among the people, just as there will be false teachers among you. They will secretly introduce destructive heresies, even denying the sovereign Lord who bought them—bringing swift destruction on themselves. Many will follow their depraved conduct and will bring the way of truth into disrepute. In their greed these teachers will exploit you with fabricated stories. Their condemnation has long been hanging over them, and their destruction has not been sleeping. (2 Peter 2:1-3)
Posted by Peter Saunders at 07:47