Arise Sir Richie! It was a tough fight but the right team won 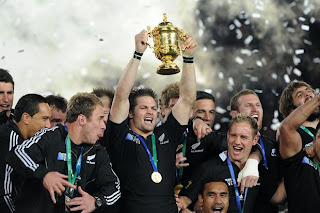 By most reckonings New Zealand’s victory in the rugby world cup final last night should have been a mere formality.

The All Blacks were playing France, who they beat by 20 points in the pool stage of the competition, in front of a stadium of over 50,000 supporters at Eden Park, Auckland where they have not lost for 17 years.

They had been the most impressive team throughout the tournament by a distance, scoring 73 more points and 11 more tries than any other side. And they had just dispatched Australia, the world number two side and tri-nations champions 20 to 6 with a consummate display of all round skills in the semi-finals.

By contrast France had limped through to the finals, losing two pool games on the way, sneaking past Wales in the other semi-final by just one point after a controversial red card had left their opponents playing 60 minutes with 14 men.

But all New Zealanders, including the All Blacks themselves, approached this game with trepidation. France, unlike any other side, have the ability to lift their game for the big occasion, and in the 1999 and 2007 world cups had sent the All Blacks packing with inspired second half performances.

True to form, France lifted their game again for this final and, many would say, were perhaps unlucky not to have won. Instead they went down 8-7, denied by desperate All Black defence.

Like most Kiwis I found the whole experience unbelievably stressful. I felt elation at the end of course, but this was overshadowed by a feeling of profound relief.

After 24 years since the last world cup victory, the agony was finally over.

‘Not pretty’, as captain Richie McCaw said, but effective, and after all a win is a win.

This win makes it two-all for South Africa, Australia and New Zealand in world cups and is especially important for New Zealand because of the trauma the country has been through in the last year.

Just over a year ago an earthquake of 7.1, miraculously non-fatal, struck Christchurch on the same day that a plane crashed on the Fox glacier killing nine people. Two months later 29 died in the Pike River mining disaster and in February this year 181 died in a second Christchurch earthquake which destroyed most of the centre of the city.

On world scale these might not seem to be big numbers, but for a small country of 4 million people they were devastating. And the damage from the current ongoing oil spill from the stranded container ship Rena, off the North Island’s east coast, had added insult to injury.

In addition all New Zealanders felt the pressure to throw off our reputation for under performing at world cups.

New Zealanders are rubgy’s leading points scorers of all time and the only international team with a winning record against every test nation they have ever played. The All Blacks have held the top ranking in the world for longer than all other countries combined and in over 100 years only five of the top twenty ranked test rugby nations have ever beaten them.

New Zealand competes annually with Australia and South Africa in the Tri Nations competition, and has won the trophy a record ten times in its 16 year history. They have also completed a northern hemisphere Grand Slam four times (in 1978, 2005, 2008 and 2010), defeating all four Home Nations (England, Wales, Ireland and Scotland) during one tour. Ireland and Scotland have never beaten them.

In view of New Zealand’s dominance, their lack of success in world cups has been one of the great mysteries of modern sporting history.

France was truly magnificent last night. By contrast, the All Blacks stuttered and probably put in their worst performance of the tournament, missing three out of four kicks at goal and having only 45% of the possession.

But the result was the right one for the country and for international rugby. Apart from captain McCaw, who has finally won in his third and last world cup, probably the happiest man on the pitch last night was New Zealand Prime Minister John Key, who faces a national election on 26 November. Losing their third fly half in the tournament during the match made things even harder. But it was perhaps ironic that their fourth choice Stephen Donald, kicked the winning goal.

If the All Blacks had lost last night he could have effectively written off his chances. But now, with the change in national morale this victory will bring, perhaps he still has at least a fighting chance.
Posted by Peter Saunders at 12:15