A poem to commemorate the birth of the seven billionth person 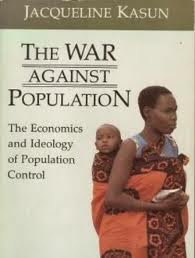 With the world's population reaching seven billion we are going to hear more demands for population control.

But the fact is that families voluntarily limit the size of their families once they know that their children will survive.

So the real priority is not measures to control popluation but better education for women, community development, better healthcare, fair trade and more even distribution of resources.

To commemorate seven billion day here is a poem on a more just solution:

The folk from Guzzle Gorge (who were the richest on the planet)
Had noticed falls in food supply and wondered: 'who began it?'
'It's numbers (not consumption) that's to blame' was their deduction
And so they brought in measures to curb others' reproduction

They'd first flogged powdered milk like it was going out of fashion
And 'Lomotil' to treat the diarrhoea caused (and bring more cash in)
But now they dished out, condoms and fallopian tube ligation
And followed these with RU 486 and 'termination'

The poor will choose less offspring once they know that they will live
And poverty's made worse by those who have and yet won't give
Perhaps it's no surprise that those who guard the global purse
Seem to believe that children aren't a blessing but a curse
Posted by Peter Saunders at 14:27