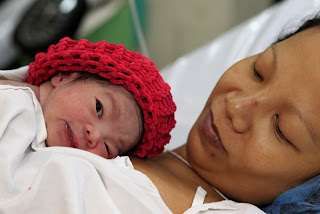 According to the BBC, when I was born, I was the 2,909,761,661st person alive on Earth and the 76,445,556,695th person to have lived since history began. You can calculate your own number on line and if you put in today’s date you will learn that there have been 83 billion people born since 50,000 BC. So that means that just under 10% of everyone who has ever lived is alive today.

The reality is that no one has a clue when the seven billionth child will be born let alone who it is.

According to some experts, the UN, who claim that the seven billionth will be born today, have jumped the gun. The US Census Bureau says the most likely date the world population will reach seven billion is between March and April next year. Sergei Scherbov of the Vienna Institute of Demography, meanwhile, says there is a 95% probability that the figure will be reached between January and July 2012.

Regardless, however, today is being celebrated as the actual date.

Some sections of the media have given a platform to politicians and ideologists – like Jonathan Porritt and Andrew Mitchell - who are using the birth of the seven billionth person as a pretext for tighter population control through contraception and abortion. I have already blogged about the false prophecies of past population control champions Malthus (who predicted respectively that the world would run out of food in 1890) and Ehrlich (who said in 1968 that there was an even chance Britain would not exists by the year 2000).

It was therefore refreshing to see a much better balanced article on the BBC website which seeks to grapple with the issues. It is critical of Malthus and Ehrlich and gives airspace to critics who argue that rich people have imposed population control on the poor for decades and that such coercive attempts to control the world's population have often backfired and were sometimes harmful.

The article, which is based on a BBC World Service serial, takes issue with the population control lobby and is worth reading in full.

The idea that the rich are threatened by the desperately poor has cast a long shadow into the 20th Century. From the 1960s, the World Bank, the UN and a host of independent American philanthropic foundations, such as the Ford and Rockefeller foundations, began to focus on what they saw as the problem of burgeoning Third World numbers. The believed that overpopulation was the primary cause of environmental degradation, economic underdevelopment and political instability. Massive populations in the Third World were seen as presenting a threat to Western capitalism and access to resources.

In 1966, President Lyndon Johnson warned that the US might be overwhelmed by desperate masses, and he made US foreign aid dependent on countries adopting family planning programmes. Other wealthy countries such as Japan, Sweden and the UK also began to devote large amounts of money to reducing Third World birth rates. What virtually everyone agreed was that there was a massive demand for birth control among the world's poorest people, and that if they could get their hands on reliable contraceptives, runaway population growth might be stopped. But with the benefit of hindsight, some argue that this so-called unmet need theory put disproportionate emphasis on birth control and ignored other serious needs.

In the early 1980s, objections to the population control movement began to grow, especially in the United States. In Washington, the new Reagan administration removed financial support for any programmes that involved abortion or sterilization and broad alliance to stem birth rates was beginning to dissolve and the debate become more polarised along political lines. While some on the political right had moral objections to population control, some on the left saw it as neo-colonialism. Faith groups condemned it as a Western attack on religious values, but women's groups feared changes would mean poor women would be even less well-served.

As I have argued previously, the experience of Europe is that women will voluntarily limit family size once they know their children will survive. This will follow investment in women’s education, healthcare and addressing rights to things such as food, employment, water, justice and fair wages. The rich world, with is crippling debt through overconsumption, needs to embrace far simpler lifestyles and share its resources more equitably.

If we try to impose population control measures without addressing these fundamental issues of injustice it simply will not work.
Posted by Peter Saunders at 06:54