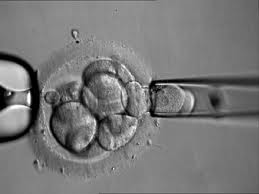 A consultant in genetic medicine has said that he believes new technologies that enable doctors to search out and discard human embryos with severe genetic disease are ‘a tremendous blessing and a wonderful thing’.

Dr Shane McKee made the announcement this week on Channel Four’s 4thought programme as part of a debate on the use of pre-implantation genetic diagnosis.

Judging by rapid responses on the Chanel Four website most viewers seem to agree with him.

Dr McKee’s announcement comes a week after news broke of a new test for discovering chromosomal abnormalities in embryos.

Chromosomal anomalies are known to be the single most common cause of miscarriages. Historically, about 50% of miscarriages were thought to be due to abnormal chromosomes.

However, now that pregnancy is detected earlier and we know that miscarriage is more common than previously thought, it is now suspected that the percent of miscarriages due to chromosome abnormalities is actually higher than 50%. Extra copies of chromosomes 15, 16, and 22 are often seen in miscarriages.

A transcript of Dr McKee’s talk is below with my comments added in italics.

What we’re trying to do is to offer families the chance to do what they feel is ethically right. I’m Shane McKee. I’m a doctor in genetic medicine and I regard the technological advances that we’ve made over the past ten to fifteen years as being a tremendous blessing and a wonderful thing that we can bring to bear to try and help individuals and families either affected with, or at risk of, severe genetic disorders to live and reproduce as normally as possible.

>> Dr McKee is talking about the technique called pre-implantation genetic diagnosis (PGD) where human embryos are produced by in vitro fertilisation and then examined for chromosomal or other genetic abnormalities in a laboratory. Those judged to be abnormal are then discarded and only normal embryos are placed back in the uterus. He regards this as a ‘tremendous blessing and a wonderful thing’. Many embryos with genetic abnormalities do not survive pregnancy of course but many also do as people with a range of disabilities. Some of these are severe resulting in death during childhood but many others live on into adulthood.

I think it’s very important to make a distinction between the efforts that we make to try and prevent a child being born with a severe genetic disease and the notion that we are somehow against disabled people.

>> Dr McKee has to say this but in fact what he is advocating is selecting out and destroying disabled people at the embryo stage so that they never have a chance of being born. So when he talks about ‘preventing a child being born with genetic disease’ what he really means is weeding out the affected individual after fertilisation but before implantation. Many disabled people would see Dr McKee as discriminating against them and making judgements about the value of their lives which he has no right to make.

Whenever you think about families who are already faced with the problem of looking after a disabled child, if you introduce another disabled child into the equation, a second or a third, then that is an added burden on that family and it actually detracts from the care that they are able to offer to the first child or the second child.

>> This is of course true. Caring for one severely disabled child can be a huge challenge. Caring for two or three is an even greater one and families with disabled children need huge support. But Dr McKee does not make it clear that the solution he is advocating involves actually ending the lives of these disabled individuals at the embryo stage. In other words, the burden on families is relieved by killing those who are perceived to be creating the burden. Caring for the sick and dying is surely a far more compassionate option and societies will ultimately be judged on the way they treat their weakest members. To say that human lives which create a burden for others can be justifiably killed is to establish a very dangerous precedent indeed. It also ignores the many positive effects that those with disabilities have on society.

So I think it’s very important that we put this all in context. If you were trapped inside a burning in vitro fertilisation clinic and you had a four year old child in one room and you had a vatful of embryos in another room I think most people would save the child first.

>> It is true that most people do believe that children are more important than embryos but this is a false analogy. Dr McKee is not talking about saving a child over an embryo. He is actually advocating destroying embryos that have abnormalities and ensuring that they never have the chance to live.

And that’s because I think innately we know that a child is of more value than the egg that leads on to a child.

>> Note the subtle sleight of hand here. In the last paragraph Dr McKee was talking about embryos. Now he is talking about eggs. No one would argue that an unfertilised human egg is a human being. But many people take the view that an embryo (produced by a sperm fertilising an egg) is an early human being and has a right to life.

In fact I would find that the reduction of the value and the joy of human life down to something that you could fit inside a single egg cell as to be something slightly demeaning.

>> Again the sleight of hand with reference to egg and not embryo. But Dr McKee is actually not advocating destroying eggs but embryos. The human embryo is not a potential human being but actually a human being with potential, a potential child or adult. The only difference essentially between a human embryo and you or I is nutrition and time because all our genetic attributes are already present in the embryo. Furthermore, the human embryo’s value should not be based on its age or size – these are not morally relevant characteristics – but on the fact that it is human.

What Dr McKee does not say of course is that as well as supporting the destruction of abnormal human embryos he also supports abortion up until the time of birth for ‘serious’ congenital abnormalities. He also believes that fetuses under 22 weeks gestation are 'not people'. That is because he judges the worth of a human being on the basis of its capacity for sensation, communication and awareness. Embryos and foetuses by this reckoning are not actually persons with rights. Those who do not accept Dr McKee’s unstated presuppositions about the value of life before birth will also not concur with his conclusions. Dr McKee would, for example, not agree to the Declaration of Geneva which requires that doctors ‘maintain the utmost respect for human life from the time of conception, even against threat’.

For an alternative view on disability see this video which has gone viral on the internet with over 7 million views
Posted by Peter Saunders at 15:42