Sometimes winning is not everything 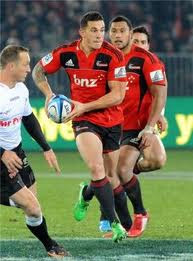 It would have been a fairytale ending had the Canterbury Crusaders lifted the Super Fifteen rugby title at Sun Corp Stadium in Brisbane last night. After fighting their way in to the final after a year in which they played not one home game – the AMI stadium was destroyed in the Christchurch earthquake – beating the Queensland Reds at home in front of over 50,000 screaming Aussie fans would have been the icing on the cake.

But it was not to be. In a game strewn with turnovers, forced errors and rock solid defence on both sides the Reds held on for a historic victory by five points closing it out by 18-13. The Crusaders hopes were finally dashed by a brilliant 60 metre solo try by Reds halfback Will Genia.

Nail-biting stuff. We can lament the six lost lineouts, overcooked kicks to the opposition back three and silly penalties conceded, but all credit to the Reds for a fine win in a roller-coaster white-knuckle showdown between the best two teams this season.

We must not be ungracious. The Crusaders have won the super rugby title seven times already. This was the Reds first title and they have had a tough year too with over 40 dying in the Queensland floods. They thoroughly deserved it and it was a real joy to see lads from two rugby teams whose grounds had been destroyed in the flooding delivering the awards to both sides after the game.

For me the highlight was Crusaders and All Blacks captain Richie McCaw’s closing speech in which he gave credit to the opposition, credit to his own band of warriors and a tribute to the people of Christchurch who have endured so much.

‘It's been a tough year’ McCaw said, ‘but every time we have taken the field this year, hopefully we have done you proud back in Christchurch and put a smile on your face. I know it's been a tough time at home. We got ourselves in with a chance. We can hold our heads up high, and maybe next year.’

It was not the Crusaders best year, but I think it was their bravest. They finished as winners of the New Zealand Super Rugby Conference and qualified for the Super Rugby final after beating the Stormers in Cape Town.

In the course of the season they traveled more than 100,000 kilometers and played ‘home’ matches in locations in Nelson, Wellington, Timaru and London where we had the privilege of watching them in a flawless display against the Natal Sharks.

We say in New Zealand that rugby is not a matter of life and death - it’s far more important than that!

Maybe that’s true. But rather than feeling gutted today – as I did after the All Blacks ignominious exit from the World cup in 1999 – instead I felt a deep sense of pride. And I think I will remember the year the Crusaders came second with more satisfaction than any of the seven in which they lifted the trophy. I’m proud to be a Cantabrian. Well done lads!
Posted by Peter Saunders at 11:52